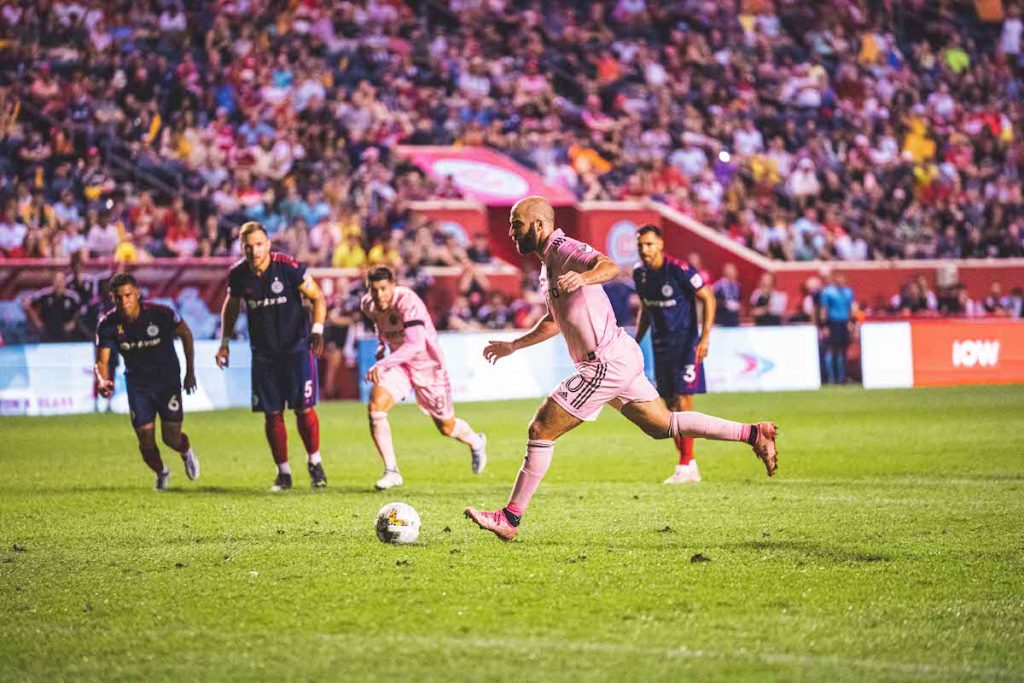 SeatGeek Stadium – Inter Miami CF lost its third consecutive road game Saturday night, going down 3-1 to Chicago Fire. The Fire had not scored a goal in its last four games but managed to break out of their scoreless streak against the Herons. The loss dropped Miami to ninth place in the Eastern Conference, five points behind seventh-place Columbus Crew, with five games left in the regular season for the Herons.

The Starting XI for Inter Miami had Kieran Gibbs, Alejandro Pozuelo, and Indiana Vassilev as the new faces from the previous game’s starters. Pozuelo was returning from a red card suspension, and defensive stalwart Damione Lowe missed the match due to a knee injury suffered in training. Lowe’s injury led to Chris Mcvey starting at center back, with Kieran Gibbs being inserted as the left back.

The first half saw Chicago control the tempo very early on, with Miami looking out of sync and sloppy. Jhon Duran scored a header at the 38′ minute to put the Fire ahead 1-0. IMCF continued to play without much intensity or purpose and went into halftime 1-0.

IN JHON WE TRUST pic.twitter.com/66Yum1eC13

Xherdan Shaqiri put Chicago up 2-0 at the 64′ minute with a strike that rocketed past Nick Marsman. Miami was not showing any signs of being able to revert the score in the match but was awarded a golden opportunity on a penalty that was committed on Alejandro Pozuelo.

Gonzalo Higuain notched the penalty kick for Inter Miami CF, cutting the deficit to 2-1 at the 77′ minute.

Jhon Duran scored his brace at the 87′ minute to put Chicago ahead 3-1. There would be no comeback for the Herons.

The match ended 3-1, with the Fire stunning a lifeless Miami squad.

Coach Phil Neville faced the media after the loss to Chicago, and I’d like to expand on three things he said.

The fans also are massively disappointed with the result against Chicago Saturday night, but I’d venture to say they are more upset with the apparent lack of fight and intensity from the team. The Herons looked unfocused, and uninspired against Chicago. The players and the coach have to take ownership of this poor showing.

“We’ve hit a bad run at the wrong time.”

They’re five games left in the regular season for Inter Miami CF, plenty of time to go on a good run at the right time. This team has always fought through bad breaks throughout this season, and now should not be any different.

Coach Neville letting me know how he will select the starters for Tuesday’s massively important game against Columbus Crew.. #InterMiamiCF #MLS pic.twitter.com/2GlNi7Cj5z

Those players should have played against Chicago Fire. Losing three in a row on the road was dismal, and looking tepid in the match against the Fire was awful.

I was genuinely shocked by how badly Inter Miami CF played against Chicago Fire. A loss is always a possibility, but what I did not expect was the meek showing by the squad. The effort and desire to make a playoff run was not apparent at first glance.

Wow! I really did not expect this awful performance from the Herons..Neville has some lineup decisions to make for Tuesday’s game against Columbus Crew.. #InterMiamiCF

Alejandro Pozuelo is very hot and cold for Miami. Pozuelo was invisible again, just like in the first match against NYCFC, and the Toronto FC game. Alejandro is playing for a contract in Miami or elsewhere, and he should be much more consistent with his high level of play.

Coach Neville has five games to show that he can make the most of the talent that he has at his disposal. The Herons need to make the playoffs, not to save his job, in my opinion, but to round out an up-and-down campaign.

Columbus is coming to Miami on Tuesday night to play another crucial game for Inter Miami CF. All the chips are on the table for this game, and Phil and the boys need to go all in and win no matter what.

No change in the top 5⃣ #AllForCincy jumps from 8 to 6 📈#NERevs and #InterMiamiCF 📉
On the outside looking in 👀#MLSPlayoffs pic.twitter.com/fYLoXSy0Ll