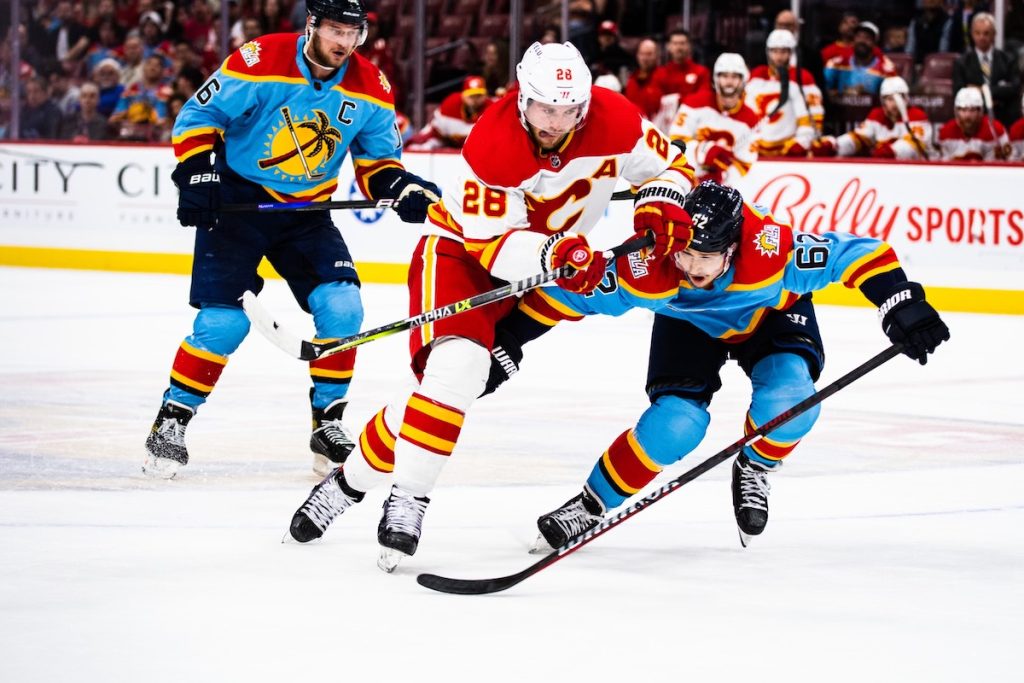 Sunrise, FL – Featuring a reunion of three players returning to face their former team, to a new sweater that’s easy on the eyes, Florida’s matchup against the Calgary Flames had a lot in store. It proved to be an even affair all the way to the wire, as the Flames just edged out the Panthers by a score of 5-4 in shootouts.

Florida never led once in the game. While their offense was productive and matched up evenly with Calgary, the Panthers defense stumbled and gave up critical goals, some of which were not long after Florida scored their own.

Setting Up a Special Night

Being the first time both teams have met this season, it was extra emotional for both teams as Flames center Jonathan Huberdeau and defenceman MacKenzie Weegar returned to South Florida for the first time after being traded in the offseason for left-wing Matthew Tkachuk, who leads the Panthers in assists.

A warm welcome back to South Florida tonight.

In addition, the Florida Panthers unveiled their Reverse Retro look, a powder blue sweater with red and yellow accents featuring the vintage Florida Sun logo in the center. While they announced the jersey a while ago, this was the first game they’ve used it on the ice.

Somehow they are even better than we ever could have imagined#ReverseRetro pic.twitter.com/VsHBP4H3QG

The Panthers entered the game with a 9-7-1 record off the heels of a 6-4 home loss against the Dallas Stars. They’re tied with two wins and two losses in the past four games, all of which were at home.

Calgary arrived in South Florida with similarly mixed results, sporting a 7-7-2 record with recent wins against the Winnipeg Jets and Los Angeles Kings, but also losses against the Boston Bruins and Tampa Bay Lightning, who are seen as some of the best teams in the NHL so far.

The first period was filled with action, but not much scoring. While Florida has done a solid job being the early aggressor in their home games, it was Calgary who got off to the hot start with six shots in the first seven minutes.

Both the Panthers and Flames exchanged penalties later on, and Calgary would be the one to capitalize on theirs. Adam Ruzicka slapped a blast from the left side past Panthers goalie Spencer Knight to capitalize on a power play opportunity and take the lead.

In a rare instance, the visiting team led in shots on goal for once at the FLA Live Arena. The dominance on offense by the Panthers have been a major factor of their impressive home record up to this point.

Extra Spicy in the Second

The Flames sprung into action early, doubling down on their lead with a quick strike by centre Nikita Zadorov less than a minute in.

Florida kept their composure and was able to figure it out less than three minutes later when centre Colin White skated around the net and slipped the puck right by Flames goalie Jacob Markstrom to bring some life back to the Panthers offense.

After an unsuccessful power play by Calgary, the game took a turn for the brawlers, when four different penalties were handed out to the Flames and Panthers for throwing fists.

First, Calgary defenseman Dennis Gilbert and left-wing Ryan Lomberg were given five minutes in the box after breaking into a fist fight with multiple connected swings.

Next, Florida right-wing Radko Gudas and Calgary right-wing Brett Ritchie were both given roughing penalties for also getting into a fight.

Through the chaos, it was the Panthers that came out with another goal. Sam Reinhart, off a pass by Tkachuk, slapped a shot that flew by a couple Flames into the net for the equalizer.

Calgary had been the more aggressive team both on offense and on delivering hits all game. After a faceoff in Panther territory, Flames center Elias Lindholm won the puck drop and darted a pass to Ruzika who got by Knight and killed off all of Florida’s momentum in just two minutes.

The rest of the second period was an almost equal number of shots by both teams with in, and the horns rang with a score of 3-2 in favor of the visiting team.

Things are Heating up Now

The third period got off to a hot start as Panthers centre Eetu Luostarinen finished off a barrage of shots on Markstrom to tie the game once more.

Calgary once again had another power play opportunity only seven seconds later, but the Panthers defense held their own to keep the game even.

The defense would fall eventually as Flames centre Blake Coleman stole a Florida pass right in front of Knight and swiped the puck in to take back the lead again. For every chance that the Panthers had to finally take the lead, Calgary answered with a goal of their own.

With seven minutes later, after a few shots on goal, Tkachuk would finally get a score on his former team. A deep pass was caught by Tkachuk only inches away from Markstrom and a quick slapshot was all it took to tie the game once more.

While both teams had opportunities to come out on top, nothing went in, signaling for extra hockey to decide who’d win.

Too Hot to Cool Down Here

The overtime period was five full minutes of shots on goal, but both defenses held strong. After six shots and a few stoppages, neither team could find a way to win, forcing a rare shootout period.

Panthers Anton Lundell opened up the shootouts and was successful, giving early momentum for Knight to work with a lead.

While he blocked the first shot attempt by Calgary, he couldn’t stop Huberdeau with the second, as the former Panther, who had a relatively quiet night, kept the Flames in it.

After five missed attempts by both teams, it was down to Flames defenceman Rasmus Anderson. He swerved right of Knight, forcing him to move right to defend. A sideways shot by Anderson was sent behind the back of Knight who moved forward in the process, ending the game in favor of Calgary.

The Sizzling Statistics & What’s Next

This was a very even game on offense. Both teams wound up with 35 recorded shots and a similar amount of faceoffs won. They also were both penalized five times totaling 13 minutes, with one power play goal each. Calgary was the more physical team in the end, almost doubling the number of hits, with 33 compared to 17.

For the Cats, four different players earned goals but Sam Bennett led all Panthers in assists with two total. Knight recorded 31 saves from 35 shots including six during power plays.

Florida’s record drops to 9-7-2, and the Panthers find themselves in fifth place in the Atlantic Division, behind the Detroit Red Wings, Tampa Bay Lightning, Toronto Maple Leafs, and the Boston Bruins.

The homestand for Florida is over, and the Panthers will quickly head to Ohio to take on the Columbus Blue Jackets on Sunday, November 20th at 6PM. They’ll then come back home for a big matchup against Boston on Wednesday. 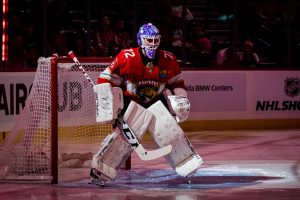 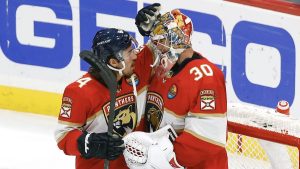