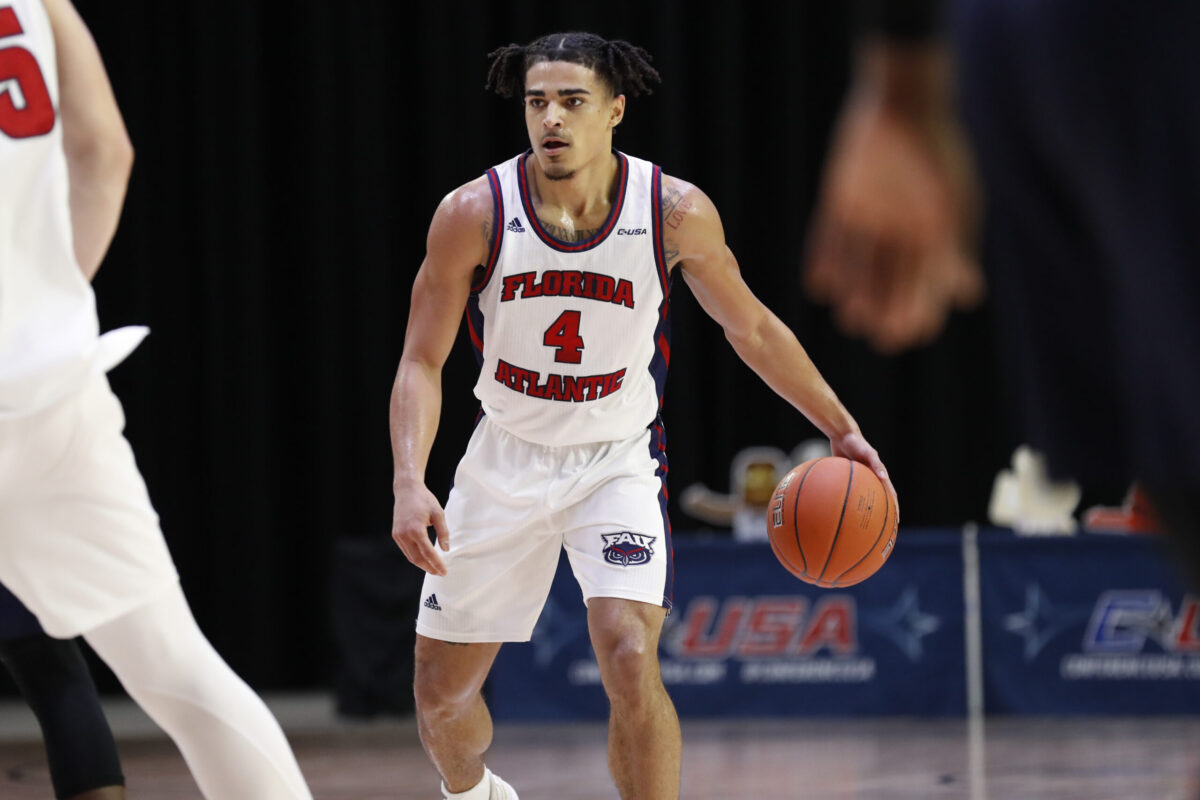 The FAU Men’s Basketball team went 2-1 in the Paradise Classic at home, with the loss being against the Troy Trojans in a heartbreaker, 83-78.

In the Paradise Classic, FAU hosted the UT Martin Skyhawks, the North Dakota Fighting Hawks, and the aforementioned Trojans.

FAU bounced back after another tough loss to the Miami Hurricanes last Tuesday by beating the Skyhawks and Hawks on Sunday and Monday, respectively. However, when it came to the Trojans on Monday, the Owls couldn’t find their footing.

GAME OVER: #FAU breaks their two-game winning streak in a loss to #Troy, 83-78. Disappointing performance in OT. Martin led with 22 points, Greenlee with 14, six rebounds and seven assists. 2-1 in the Paradise Classic. https://t.co/Fduxam6DY9

The Owls Still Searching For Their Footing

Head coach Dusty May gives his opening statements in his post-game presser following the game:

“Hats off to Troy, they played a very good game. They got 51 points off of their bench, they had two guys that hadn’t made a ‘3’ this year coming in go 6-for-6, so they played very very well. We battled for 45 minutes, played hard, competed, and it was a great college basketball game. It felt like a conference game, so hopefully, this will prepare us going forward.”

It was an inconsistent game for the Owls as there were times when the team was hot and cold, especially the latter in key situations. Defensively, May wants to see the team more disciplined on that side throughout the whole game:

“I think discipline defensively and finding a way just to not foul so much. And with Vlad [Goldin] being in early foul trouble, I’m going to look at the tape to see what he can do better. In this particular game, Mike Forrest was in foul trouble, played limited minutes. So, with Bituma Baruti hurt and those two guys not being able to play because of foul trouble, this was the wrong night to not have your full roster because of how deep Troy is and how athletic and talented they are.”

Final from day three of The Paradise Classic. pic.twitter.com/AmrMzctzez

The Future is Bright

Freshman guard Alijah Martin continues to be a star in the making as he led the team in scoring with 22 points (a career high), eight rebounds, two steals, and a block. He’s showing to be a significant two-way player on offense and defense.

However, when relied upon in the fourth quarter, and especially overtime to keep the Owls in the game or take the lead, he looked flustered. May attributes his overtime performance to being gassed:

“I thought for most of the game he played very well. And I think he probably ran out of gas a little bit, their physicality caught up with him. But he’s he’s growing up before our eyes for him to be making the plays he did to have us in position to win, I applaud him, we just need contributions from more guys. We have to value every possession, and especially in games like this when there were so many possessions, but we got to play more disciplined defensively and value the ball.”

Another double-digit scoring night for @martin_alijah 💥

In a repeat nightmare for the Owls, free throws were one of the deciding factors against Troy, where FAU made 16 out 26 free throws. One of the integral free throws missed was when Everett Winchester drew the foul in the remaining seconds of regulation and made one to tie the game, but missed the second to take the lead.

May talks about the frustration about the free-throw shooting, but says that they need to find ways to win when statistics like that are down:

Back to Full Steam

Coming off of an injury, Guard Bryan Greenlee played a team-high 41 minutes. When asked if Greenlee is at 100% when referring to the injury, May attributes different aspects that could indicate he’s fully healthy:

“He looked 100% with the speed and quickness. Obviously his stamina may be affected a little bit but he’s playing his way into better shape and he gave it all he had tonight. Very good floor game for BJ [Greenlee].”

The Owls will get almost a week’s worth of a break as their next contest is against James Madison University on Sunday at home. May talks about the break and touches on what the team will emphasize during practice.

“We have to figure out a way defensively to be aggressive without fouling. And we played three games in four days. We’ve had a whirlwind lately, and it gives us a chance to take a step back where we have a couple of days where we don’t have to focus on an opponent and worry about us. We have to be very creative with what we need to do going forward with our ball screen coverages and with our transition defense. So this this break is probably the longest we’ll have the rest of the season when it comes to practice and being able to focus on us for a couple of days and not worry about an opponent until later in the week. So we have to use it wisely and figure out a way to get better.”

After the disappointing loss to Troy, FAU’s record is at 3-3 and will look to cover ground before their first conference game against Charlotte on Dec. 30.