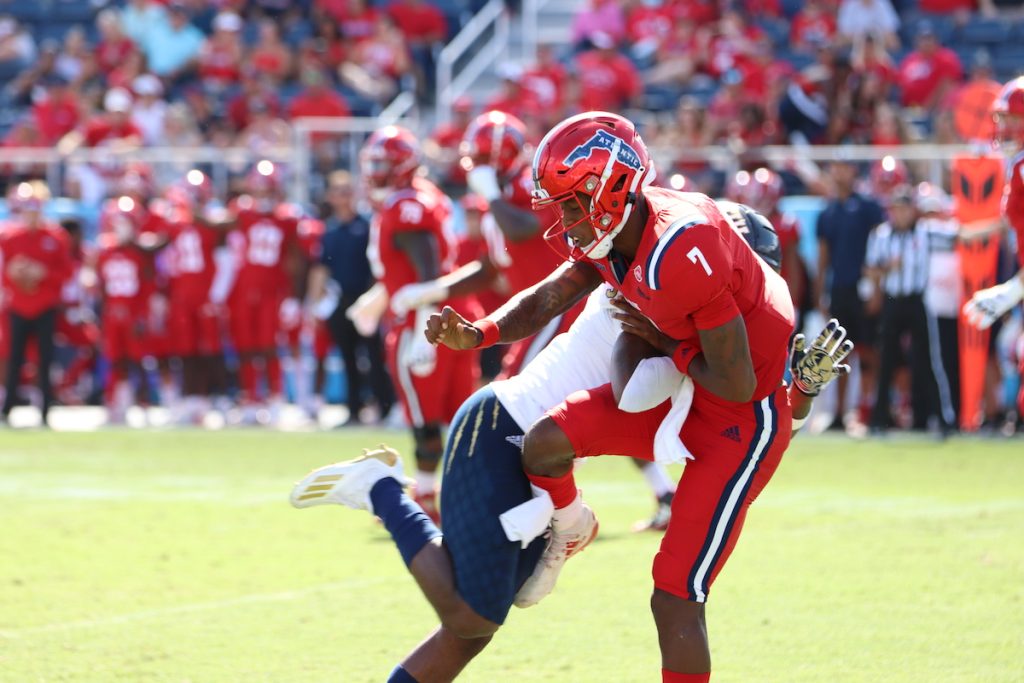 Miami, FL – This Saturday, November 12th, the 21st edition of the Shula Bowl is back and ready to go. The last time these two teams faced off, FAU took the 58-21 victory. FIU is 5-15 all-time against FAU and has lost the last five meetings against Florida Atlantic. In Tuesday’s availability with FIU coach Mike MacIntyre, he said that “it hasn’t been as big of a rivalry” due to the trophy staying on one side of Florida (Boca Raton). He also mentioned that “it is FIU’s fault” when it comes to not playing better against FAU. For more on what coach MacIntyre said when it comes to the rivalry between FAU and FIU press the link below to see the full response.

Coach MacIntyre asked about the rivalry between FAU and FIU.#PawsUp #FIU pic.twitter.com/F4o8vQeiQU

So far, the FAU Owls are 4-5, and 3-2 against Conference USA Teams this season. The offense is led by former Miami Hurricane N’Kosi Perry. The defense is led by the 6’3″, 356-pound defensive linemen Evan Anderson (#8).  The main source of offense comes from the Owls’ passing game which has netted 2,013 yards. The run game isn’t far behind with a net of 1,735 yards. The main players to quickly highlight on offense are running backs, Larry McCammon, Zuberi Mobley, and Johnny Ford. The most notable names you will be hearing when it comes to receivers are LaJohntay Wester, Jahmal Edrine, and Tony Johnson.

Coach MacIntyre begins his press conference talking a little bit about the matchup against FAU and him teaching to the players a little bit about what the Shula Bowl is and who Don Shula was.#FIU #PawsUp #PantherFootball pic.twitter.com/RQsK5oxcUG

N’Kosi Perry and how to stop him

N’Kosi Perry is entering his second season with the FAU Owls, but his last one as he is a Senior. After not getting the best opportunity with the Miami Hurricanes, Perry transferred to join the Owls. Looking back at the last time he faced FIU in 2021 he went 18/21, 329 passing yards, and 3 touchdowns. Perry also rushed in for a touchdown of his own and looks to do the same against FIU this time around. However, it will come along with some challenges as the Panthers are much improved from the 2021 season. They have a new coach, and the defense seems to impress us more game by game.

When you look deeper into N’Kosi Perry, he is a jack of all trades. Yes, Perry is extremely accurate and can get a passing game going as well as anyone else. But, he can also run the ball on his own when needed. There is a high chance that we see Perry rush for a considerable amount of yards on Saturday. He will use his quickness to his advantage and put the FIU Defense on skates.

Coach MacIntyre shares his thoughts on FAU Quarterback N’Kosi Perry. Reminder to some that Perry was a former Miami Hurricane and transferred to FAU. #PawsUp #FIU pic.twitter.com/N0qELFFOQJ

The Most Notable Player on The Field: Evan Anderson

When someone is as big and strong as Evan Anderson, it is hard to miss him. The young and inexperienced FIU offensive line will have a lot of work to do this upcoming Saturday with Evan Anderson on the defensive line. Aside from Evan, “they have two or three guys… very very similar to him” said coach MacIntyre. Coach also mentioned that Anderson can “wreak havoc by himself” which says a lot about the type of player that FIU will be seeing. Anderson this season has three solo tackles and one sack but has put up enough pressure on opposing teams to cause issues.

Coach MacIntyre also gave mentions to Teja Young and Michael Antoine Jr. right after he ended up talking about Evan Anderson. This goes to show that the FAU defense is no joke. Quarterback Grayson James will have a lot on his plate this time around.

The Development and Assessment of Grayson James

I asked the coach about his assessments of Grayson James from game one of the season until now, a couple of days away from the Shula Bowl. His response was a positive outlook.

Had the opportunity to ask Coach MacIntyre on his assessment of Grayson James since game one of the season until now a couple days away from the Shula Bowl and here is what he had to say:#FIU #PawsUp pic.twitter.com/RdQOoS7aFl

Maybe the most important quote that I got from coach MacIntyre when he opened up the press conference was that FAU “subs in more defensive linemen than anybody we have played all year”. That being said, the FIU offensive line needs to keep FAU in check for as long as they can so Grayson James has an opportunity to make some plays. If the offensive line struggles, then this will be a long night for FIU. Relying on the run game won’t do much with the defensive line being one of the best they will see all year.