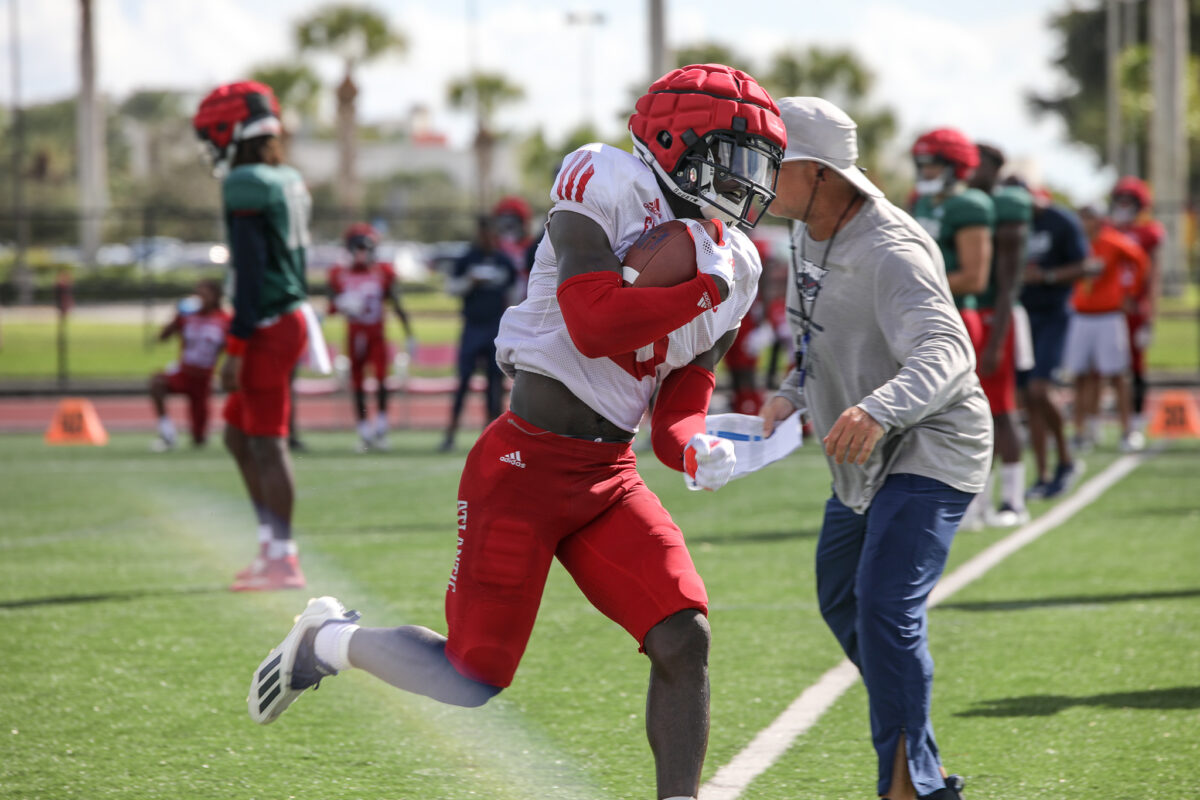 As they have extra preparation because of the bye week, it’s time for some reflection for the FAU Football Owls’ defense. They’re looking at what needs to be improved heading into North Carolina to face a conference foe, the Charlotte 49ers.

Between the two main aspects being the offense and the defense, the latter has proven to be the more consistent unit. Besides struggling against a top program like the Florida Gators and Air Force, which runs a triple-option system, they’ve shown dominance against Georgia Southern, Fordham, and rival FIU.

Even in the loss against UAB, the Owls provided opportunities for the offense to score and were gassed when their teammates would turnover the ball. On the topic of turnovers, the Blazers scored 17 points off of them.

However, there is a case to be made about the level of competition that they’ve been successful against. Because of that, they have to keep up their level of play, especially in conference play where it means the most.

Improvements To Be Made

They haven’t been perfect though. Defensive coordinator Mike Stoops expresses the sentiment, as he talks about the improvements they need to make as a unit.

“Overall, I think our guys have played good for what we’ve tried to implement thus far and [they] have tried to do what we’ve asked them to do,” Stoops said. “That part has been gratifying, and I think our effort has been good. Just eliminating some of the explosive plays would be the most troubling part of what’s happened over the last six weeks.”

A concerning trend against UAB was the deconstruction on defense on third and long plays. While defenses love those type of situations for the opposing offense, FAU struggled as they couldn’t stop the Blazers on 3rd and 13 (led to a touchdown), 3rd and 18 (led to punt), and a 3rd and 13 (led to field goal).

While the offense wasn’t on point last week, stopping UAB on high percentage scenarios would’ve lead to more chances for the offense in getting back in the game.

Stoops tackles what could possibly fix these mental lapses:

“Well I think there’s a combination of things. One was missed tackles on the quarterback. If you can’t get the quarterback on the ground, then we have problems. So on the sidelines, we could have eliminated that. They called an audible to a run in a pass-heavy defense and we didn’t react to the run like we should have. So we have to change some calls and tendencies. We also need to make better calls, certainly for us as a defensive staff to put the players in a better position to be able to execute something.”

While Stoops sees there is room for improvement on the whole unit, one cog in the machine is defensive back Teja Young. He has 31 tackles (fourth on the team) and is tied with Zyon Gilbert in interceptions with two. He talks about the state of the defense and where the team as a whole is at midway into the season.

“I feel like we’re not where we want to be. We didn’t execute on a couple things as a team, not just the defense or offense, as a team, all three phases,” Young said. We still have more work to do but we all know what lies ahead of us, so we just have to keep our head down and keep working.”

Young also speaks on what he wants to see from himself in regards to making the defense better:

“I want to be more of the guy we can lean on for the team, not just for the defense,” Young said. “Whenever we need a spark, even if it’s just giving the juice to the offense on the sideline or making the play on special teams. I want to be one of those guys that can help contribute to the win.”

When asked if the team has a chip on their shoulder, the redshirt sophomore says they should have one every week. With that, Young talks about entering the bye week with a loss and his perspective about not living in the past or looking ahead.

“The greatest thing about the game of football is throughout the season every week you get a new opportunity,” Young said. “Last week is last week. We’ll just scratch that and move on to the next game and prepare for Charlotte.”

A bye week can also be used as a time of healing as we’ve seen on the offensive side with quarterbacks N’Kosi Perry and Nick Tronti. On the defensive side, safety Jordan Helm is also battling with an injury as said by head coach Willie Taggart last Thursday.

While the extent of the injury isn’t known at the moment, losing Helm would be a blow as he’s been productive in the secondary all season. He’s currently second on the team in total tackles with 42.

The defense still has a lot to prove this season as the rest of the schedule deals with conference foes. To start the season, the rushing defense was a concern, but is it still? Against teams like Air Force and the University of Florida, the Owls gave up 400 or more rushing yards to both of them, but is that to be expected?

Through Oct. 14, Air Force is rated as the No. 1 rushing offense in the country with Florida in the third spot.. Against UAB, FAU allowed 133 rushing yards.

This will be something to look for with the Charlotte 49ers as they focus their offense with the run. They are currently ranked No. 50 in the country in rushing offense.

Coach Stoops talks about facing Charlotte, their rushing attack and his analysis of the team as a whole.

“It’s another team that leads with the run. They want to run the football. They give you multiple looks. They try to window dress a lot of things they do but they get back to four or five basic run concepts they want to do. And then they can throw. The quarterback [Chris Reynolds] makes everything work,” Stoops said. “They build a lot of RPOs where it can be a run play and he just pulls the ball and throws it. I think they do a good job with a lot of their RPOs, getting the ball on the perimeter off their run game. They do a good job on first and second down. If you’re gonna be heavy in the run, then they’re going to get the ball to their perimeter guys some ways.”

As the bye week comes to a close, game week starts with the aforementioned 49ers as the two are set to face on Thursday, Oct. 21.