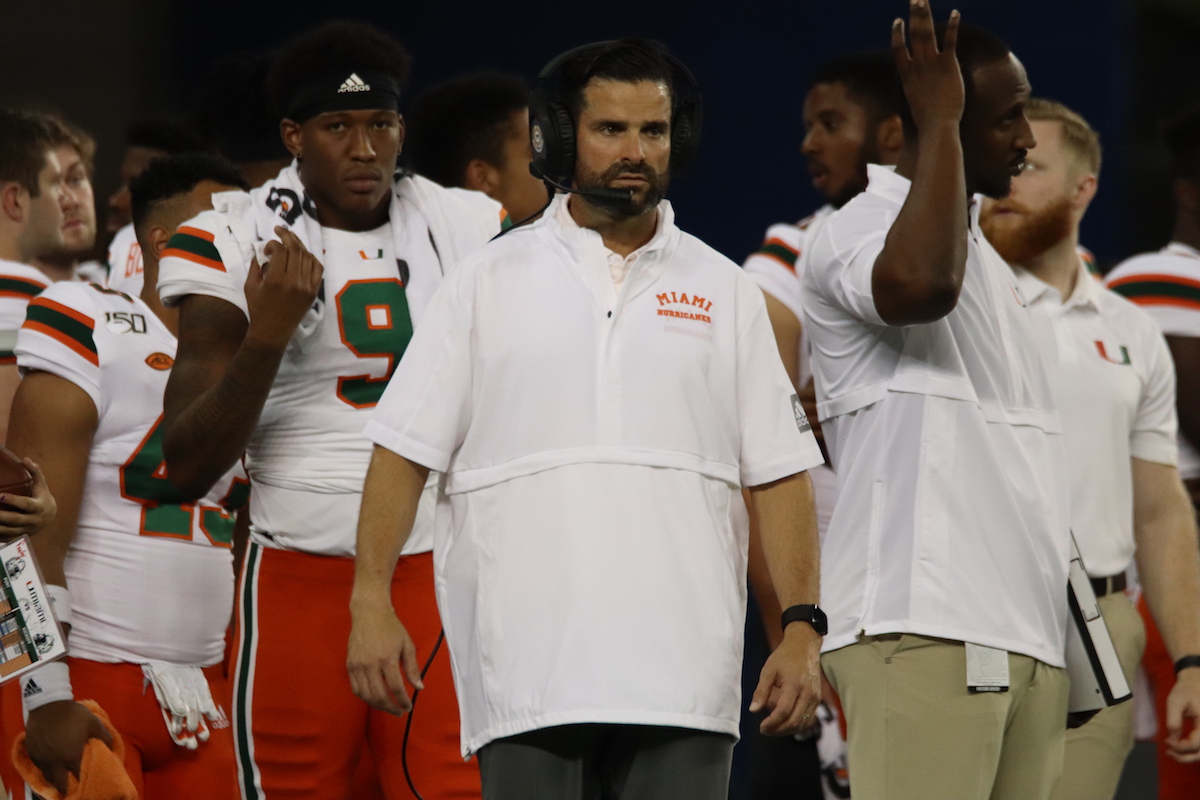 Despite the label of being a “home” game, the Panthers were greeted with a roar of boos as they rushed out from the tunnel and onto the field, the site that was once the Orange Bowl. UM’s former home. All week they prepared to play in a loud and hostile environment.

After FIU went three and out on their opening drive, the defense came up big sending a message to their cross-town rivals. Jarren Williams threw his first of three interceptions, right into the hands of Stantley Thomas-Oliver III. The offense returned, settling for a field goal. Later in the quarter, Florida International’s signal-caller James Morgan found his man, connecting with Shemar Thornton, capping off an 11 play, 80-yard effort, increasing their lead to 10. The tone had been set.

On the ensuing drive, the blue and gold committed two costly penalties in the form of a face mask and a personal foul, extending UM’s possession. By the end of the night, they’d accumulate a ghastly 14 penalties for 144 yards. One of the blemishes that coach Butch Davis wouldn’t be thrilled about.

However, the seemingly inevitable Miami score was stopped cold to start the second quarter.

Linebacker Sage Lewis made a monster stop in the red zone on a fourth and one, forcing the Hurricanes’ turnover on downs.

Later in the half, again Miami threatened to score and again FIU’s D simply shut the door. On another fourth-down play deep inside Panther territory, Williams’ pass to tight end Michael Irving II was incomplete.

It was clear Miami showed little regard for Florida International’s defense, opting to twice go for it in their playcalling. But it suited coach Davis just fine.

Williams had another disappointing performance, getting picked off three times along with a fumble, fueling a determined FIU team hungry for an upset and placing doubt on his starting job.

The Panthers looked well on their way after Jose Borregales kicked a 50-yard field goal towards the end of the half to make it 13-0. He’d surpass that feat with another kick later on, this time from 53 yards to extend the lead. The team played with a high level of intensity, unafraid of a Canes squad that while two weeks ago played their best game of the season, has remarkably struggled coming off the bye.

Miami is now  0-3 when playing after a bye week with earlier losses to both North Carolina and Virginia Tech.

The start of the second half appeared to be more of the same when Williams was immediately picked off again, this time by none other than Sage Lewis. The Hurricanes finally got on the board late in the third via a 22-yard field goal by Camden Price.

Miami suffered a major injury during the quarter when DeeJay Dallas went down with a dislocated elbow, causing a delay of game. Both teams kneeled in support of Dallas, who was later able to walk off the field on his own power.

Early in the final period, the Panthers kept up the pressure when Morgan found Tony Gaiter IV all alone in the end zone. Morgan airmailed him some company as Gaiter hauled it in for the 13-yard score.

Nobody even close to Tony Gaiter in the end zone!@FIUFootball take a 23-3 lead over Miami! pic.twitter.com/lGxNmt0LSC

In spite of the unlikeliest of circumstances, Miami just kept on fighting.

Jarren regained some of his form, making key passes to both Dee Wiggins and Will Mallory for crucial first downs. This allowed runningback Cam’Ron Harris to score, making it a two-possession game.

The Canes struck again with less than four minutes to go.

Williams found Mark Pope, completing a 35-yard play to bring the team to within six points, raising their fanbase’s spirits. These hopes were quickly dashed as Anthony Jones found an open lane in the following drive, putting it into fifth gear and rushing 37 yards for the 30-17 lead with 2:17 left in the game.

UM scored again but it was too late.

With the win, FIU improves to 6-5 while Miami falls to, also 6-5. Both teams end their seasons on the road next week, the former at Marshall and the latter at Duke.

All I can say is wow. Just wow. It’s definitely a game that will be in the annals of history for both teams. For some, it will be a dark night, a homecoming gone completely wrong. For others, it’s a shining example of a true underdog story. After the initial shock, the Miami faithful are confronted with the painful question of “How could this have happened?” Fans are likely wanting to point the finger towards FIU’s tactics of slowing down the pace of the game (Cramps) but it’s a poor excuse. You can’t ignore Williams tossing three picks, the two turnovers on downs in the first half, Dallas’ horrific injury, the terrible 3rd down conversion rate (1 for 10) and the penalties (6 in total). You also can’t deny Florida International’s success in clogging the routes, and their intensity as well as preparation. The list goes on. Manny Diaz wouldn’t name names, but he mentioned the need to challenge some guys at halftime.

This is not the “New Miami” we saw two weeks ago and it’s more reminiscent of their problems of consistency. Like when UM nearly gave up an upset to Central Michigan or the same UM that found itself trailing 28-7 to Virginia Tech at the half, with already four turnovers. You just can’t tell which side we’re going to see. Luckily, as coach Diaz has said, the solution is in the building and hopefully, in the incoming recruiting class. But the damage has been done and this will sting for a long time, especially throughout his tenure.

All I gotta say is, what a game, folks. What a game.