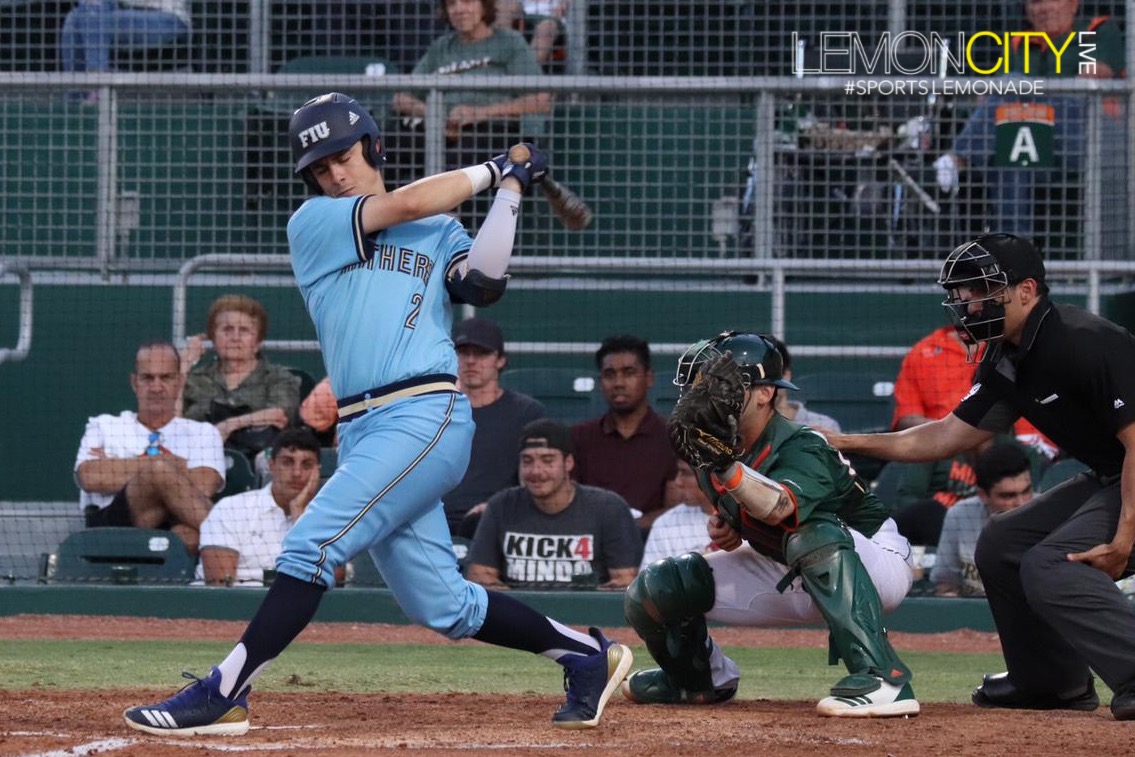 Miami, FL- The University of Miami Hurricanes scored early and very often, knocking out crosstown rival Florida International University in an epic 18-10 slugfest Wednesday night at The Light to sweep the season series. UM used a big seven-run fourth to roar ahead and never look back in a game that had a little bit of everything.

9th round tripper of the year for Jose Garcia – puts us up 2-0 early #PawsUp pic.twitter.com/PDllMil4qa

FIU flashed its claws (and power) with catcher Jose Gacia bombing one deep to left with Austin Shenton aboard to put the Panthers ahead 2-0 after the first frame. Florida International threatened again the following inning after Kaeber Rog laid down a sac bunt to move up both runners into scoring position. Jarrett Ford popped over to right field but it wasn’t deep enough. Gabe Rivera gloved it and fired a cannon down range to home plate, forcing Adan Fernandez to think better of it. Michael Amditis moved towards third base, making an impressive sliding catch to cut off the throw and prevent the run. After the defensive stop, Derek Cartaya popped out to end the threat.

After showing off his arm, Rivera decided to show off his bat as UM responded with their own two-run blast, tying it in the home half of the second.

They were just getting started.

It quickly became evident the second round between the opposing teams would be just as explosive as the first. Neither starting pitcher made it to the fourth. Angel Tiburcio was replaced by Everett Hurst after tossing the first two innings. Tyler Keysor meanwhile, was relieved by Mark Mixon to open the fourth. He was on a pitch count due to the injury bug biting the pitching staff. A grand total of 13 pitchers were used, eight by FIU alone.

The fourth inning saw a total collapse of effective pitching by the Panthers. After JP Gates flew out to right, Amditis singled and Alex Toral drew a walk to set up for Rivera. Rivera was then HBP’ed to load the bases for center fielder Tony Jenkins. Hurst was then replaced by southpaw Wil Saxton to contain the threat. It was here that FIU ceased to throw strikes. Saxton was incredibly shaky, tossing five straight balls. He walked Jenkins to drive in the go-ahead run, already falling behind Willy Escala.

Coach Mervyl Melendez had seen enough.  He pulled the sophomore out of Orlando after just five pitches. In came Jose Machado. He didn’t do any better, hitting Escala on his second pitch to drive in another run. The struggle continued after Jordan Lala walked for another run.

It got worse, a lot worse.

Anthony Vilar smacked one right above Logan Allen’s reach as the ball traveled near the rightfield line for a bases-clearing triple, putting Miami firmly in the driver’s seat. The Hurricanes tacked on one more run to cap off the inning, via a sac fly from Adrian Del Castillo to bring Vilar home, putting them up 9-2.

If anyone watched the previous meeting, they would know better than to count out FIU. The Panthers proved to be a scrappy bunch, getting back three. Shenton hit a two-RBI single to keep up the good fight. Mixon labored through the fifth issuing two walks, even hitting Javier Valdes to drive in the third run. The reliever found himself in a bases-loaded pickle with one gone but recovered and retired the next two hitters to end FIU’s surge.

Albert Maury Jr. took over relief duties from there.

Speaking of, Amditis cranked up the power that same inning and lifted one over the scoreboard in left field to keep Miami firmly ahead 10-5. Unwilling to become complacent, the Canes added on three more insurance runs with another bases-clearing triple, this time from Gates.

It was with good reason.

The Panthers loaded the bases with three straight singles before Cartaya hit his own, driving in two runs. Danny Perez then squeaked FIU’s fifth consecutive base hit over to second as part of a four-run eighth. But whenever it seemed like the blue and gold were prowling their way back in, Miami would shut the door. The Canes responded with four runs of their own, putting the game further out of reach.

27 runs! Boy was my 8-4 prediction off the mark. Looking like my winning pick is correct though. Daniel Federman coming in to close out the Panthers.

The win moves up UM to 28-14 while FIU slides to 17-23. Both teams will be at home this weekend, the Hurricanes will host Virginia Tech and the Panthers play Charlotte.

Miami ended the night with 18 runs on 13 hits and three errors.

Michael Amditis went 3-for-4 with a home run and an RBI.

Derek Cartaya had a great night, going 3-for-6 with 3 RBIs.

The last couple of weeks have seen a slew of UM players hit the injured list. The day before the game, Raymond Gil was hit in the eye by a bad hop during practice. According to coach Gino DiMare, it wasn’t a hard hit but he is dealing with a lot of swelling, thankfully there’s no concussion reported. Freddy Zamora is considered day-to-day with arm discomfort. DiMare mentioned he feels it when he’s swinging and not his throwing arm. Tyler Paige has also been dealing with an arm issue, although he is slated to return this week. Adrian Del Castillo is also out. That’s just the tip of the iceberg. Both Evan McKendry and Chris McMahon, the Canes top two pitchers, will not be starting this upcoming weekend. DiMare remains hopeful of getting them back soon but emphasized neither player will be rushed. MRI results suggest rest and rehabilitation with potential surgery down the road. Perseverance will be needed to succeed down the stretch.

Anthony Vilar busted the game open for Miami with the clutch triple in the fourth, allowing them to be firmly in command of the game despite the occasional momentum shifts.

B4: Anthony Vilar’s three-run triple was the highlight of a seven-run inning for the Canes! 9-2 Miami pic.twitter.com/1bgFCm3DNu

Never thought I’d see Logan Allen here but he had a relatively quiet evening, going 0-for-3 with a strikeout.