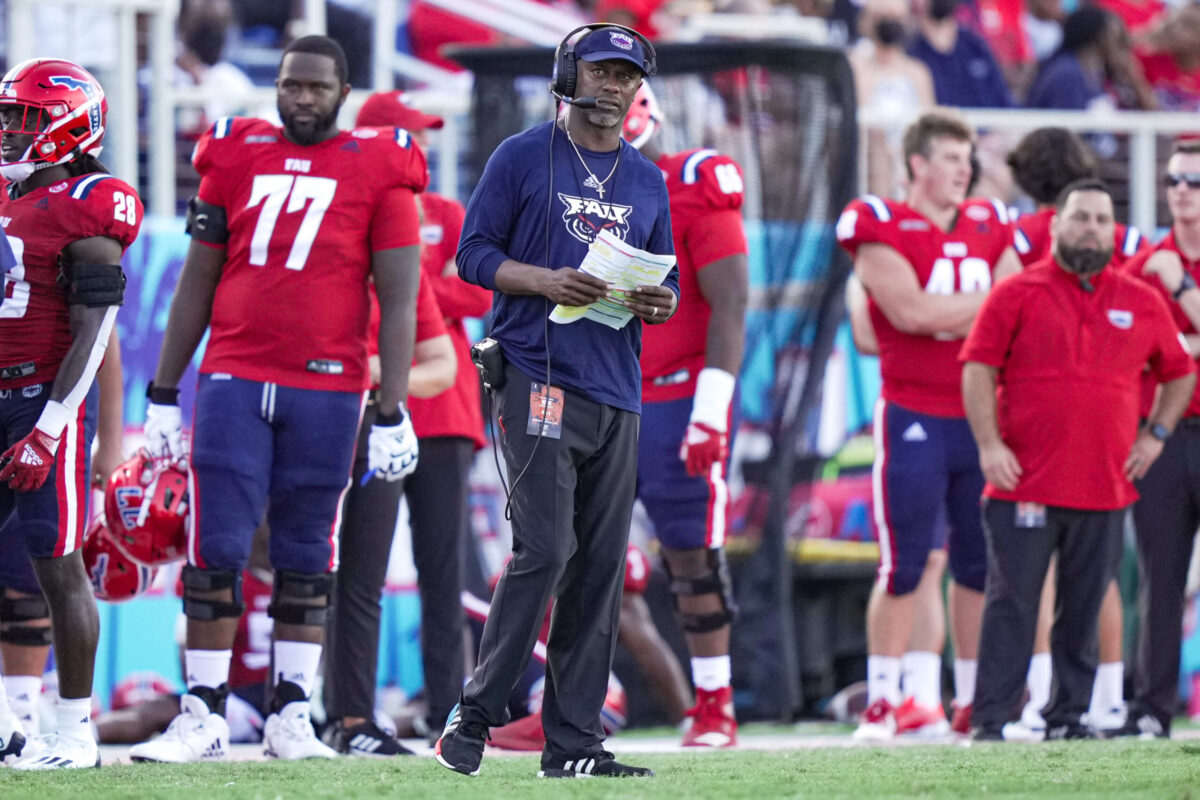 (Boca Raton, FL) – It’s that time of the year again. The FAU Owls (2-2) open up conference play against the FIU Panthers (1-3) in the 20th annual Shula Bowl in Boca Raton, Florida.

After a disappointing loss to Air Force the week prior, the Owls are looking to improve their performance on both sides of the ball. As they’re looking to rebound, FIU is the perfect opponent to start and show why they can compete for a conference championship.

FAU head coach Willie Taggart spoke to the media for the last time before game day and talked about how the team will play coming off of a deflating loss.

“I think our guys understand. We have a lot of guys that played in this game. You think of our senior class, who hasn’t lost to [FIU] before. So, they all understand the importance of this game. I didn’t think it have to be any rah rah or anything like that. I think it’s been just seriousness and understanding, again, what we have to accomplish this week, against this opponent. And it’s different than any other game because of the rivalry game. It’s different because it’s a conference game.”

On the other hand, the Panthers are suffering a harsh start to the season, losing the last three games, including a heartbreaker against Central Michigan last week. If they want to save their season before it’s too late, it starts now with an upset over FAU.

In other words, this game is huge for both teams as whoever comes out on top, has the momentum going into conference play.

FAU has been getting the upper hand against FIU in the Shula Bowl and it hasn’t been close. The Owls have won the last four contests by a wide margin, with last year’s victory being decided by a score of 38-19.

Let’s take a look at both sides of the ball for the Owls and what they need to do to ensure a victory and earn their 11th straight win at FAU Stadium.

#FAU’s uniforms for Saturday! Going all red against #FIU in the 20th #ShulaBowl. They’re asking fans to wear all red to the game. 🔴🔴🔴 https://t.co/4VZRkPlmTF

A major concern for the offense has been the issue of the inability to start fast and getting in their own way. It seems to be a broken record from FAU head coach Willie Taggart, offensive coaches, and players.

Quarterback N’Kosi Perry is looking to get back to his old ways after his worst performance of the season against Air Force throwing for 78 yards and an interception. Taggart and offensive coordinator Michael Johnson said that while game script prompted Perry to be more aggressive to a fault, he can be much better than this and expects him to rebound.

What will help Perry get the ball to pass-catchers like LaJohntay Wester, John Mitchell, Brandon Robinson, and others, is an effective running attack.

In one of the few bright spots last week, the running game was on point, total averaging 7.1 yards per carry. The Owls only ran the ball 20 times because they were behind early, which led to an inefficient pass-heavy offense.

Taggart expressed how important it is to have an effective running game:

“It’s very important because that’s who we want to be, that’s what we want our identity to be. We didn’t play to that last week. I think if you watch our team and our offense when things are going well, actually as a football team, it’s when our guys are playing that way – running the ball and being able to throw off of the run. We didn’t get to do that last week … and it showed that we [weren’t] playing to our identity and that’s something want to do.”

FAU’s leading rusher was a returning Johnny Ford as he carried the ball eight times for 66 yards. Malcolm Davidson got minimal work and even Perry rushed the ball 53 yards and a score. The ground game will get another player back as Taggart confirmed that Larry McCammon is expected to play after not traveling with the team last week.

When it comes to starting fast, it’ll be the fifth chance against FIU to see if FAU will stay true to their hopes. Taggart reinforced that reasoning Thursday and has some goals for the offense against the Panthers.

“In a nutshell, I just want our offense to execute consistently. We’re trying to find an answer to that, and I think the only answer is to actually go out and do it. The plays are there, we just need our guys totally focused on their assignments and what they have to do positionally, and everybody just has to be on the same page,” Taggart said. “I liked this week of practice, I thought our focus was where it needed to be and I thought the execution was where it needs to be. It was a lot sharper than what it’s been and hopefully, that continues and pays off for us on this Saturday.”

On paper, the offense should be explosive in this huge rivalry game.

The defensive unit had a rough day against Air Force, but it could possibly be an anomaly. Air Force is known for their unique triple-option style of offense, and when the defense has to learn an entirely new offense in a week, it could lead to disaster, which is what happened.

The Owls looked confused all night and had absolutely no answer for them, and the statistics show it. We thought allowing 400 rushing yards to Florida was bad? FAU gave up 446 to the Falcons.

While defensive coordinator Mike Stoops and his players will be going back to basics with a typical offense, FIU has a stellar running back in D’vonte Price. So far, Price has 377 rushing yards and five touchdowns.

Besides Price, FIU’s starting quarterback Max Bortenschlager has had a solid start to the season, throwing for 1105 yards, eight touchdowns, and three interceptions.

Head coach Willie Taggart knows quarterbacks well as he was one in his collegiate career at Western Kentucky and has coached multiple throughout his coaching stints. He talks about Bortenschlager and how the FAU defense can keep him honest.

“He has a really good command of the offense he’s done a great job of getting the ball downfield, and their receivers have done a good job of catching the ball and you see that because everybody is putting extra guys in the box to try to stop the run and so they’ve had more down the field plays and their receivers have taken advantage of it. That’s a recipe for success,” Taggart said. “We got to work our tails off to stop them from doing that. Like I said early in the week, we need to do a great job of stopping the run. We gotta stop the run and we got to run the ball. We feel like that’s a recipe for success for our football team if we can do those two things.”

Stoops talks about FIU’s offense and why they shouldn’t be ruled out of this game.

“They’re a much-improved team over last year. Their record does not show what they’ve done on the field. They’ve played some really good teams and they’ve played really well. They’re much more efficient offensively, they’re throwing the ball down the field vertically more than they ever have and they have confidence in what they’re doing. It’s going to be a strong matchup with our secondary guys and being able to cover. They [FIU] throw a lot of 50-50 balls, and their players have made plays so the quarterback has great confidence in his receivers and the running back is a very talented guy. Early downs are going to be critical, trying to find balance and keep the run game contained. We’re going to have a huge challenge on our hands and it’s good.”

If FAU wants to stop the run and make Bortenschlager uncomfortable, it starts with the defensive front. Owls defensive lineman Latrell Jean says he wants to see every position on the defense impose their will and to dominate. Jean goes deeper into that:

As with every rivalry game, it seems like the defense will have to bring in immense physicality against FIU. The key here is to try to eliminate Price from the game so that when Bortenschlager drops back to pass, the Owls can expect it coming.

The secondary for the Owls will play a huge part in preventing those chunk plays as Taggart said. Safety Jordan Helm has been productive this season as he’s had 36 tackles this season, but looking for his first pick of the season. Other defensive backs like Korel Smith, Diashun Moss, and company will be players to watch on the defense.

THREAD: Some sights of practice Wednesday morning. First is the #FAU Defensive Lineman getting in work: https://t.co/tu0p5UaovU pic.twitter.com/tedaeboJ97

As with every Shula Bowl game, these two teams will give it their all out on the field. However, there has to be a winner, and really, it’s an easy choice.

FAU has the better roster overall and by the end of the game, they should win big here.

The Owls offense is hoping to explode after a timid game against Air Force as N’Kosi Perry and the deep running back room look to tear apart the Panthers’ defense. There is still some concern with the rushing defense, but if they can stop or just stabilize Price, it could lead to success.

It’ll be a wait-and-see approach if FAU can start fast on offense, I can see the game being close in the first half. However, FAU will trail away in the second half.

Expect a bounce-back win for FAU against FIU in a huge way. By a “huge way,” I mean winning by multiple scores.

The Shula Bowl will be played on Saturday, Oct. 2 at 3:30 P.M. in Boca Raton, Florida. It will be broadcasted on Stadium.