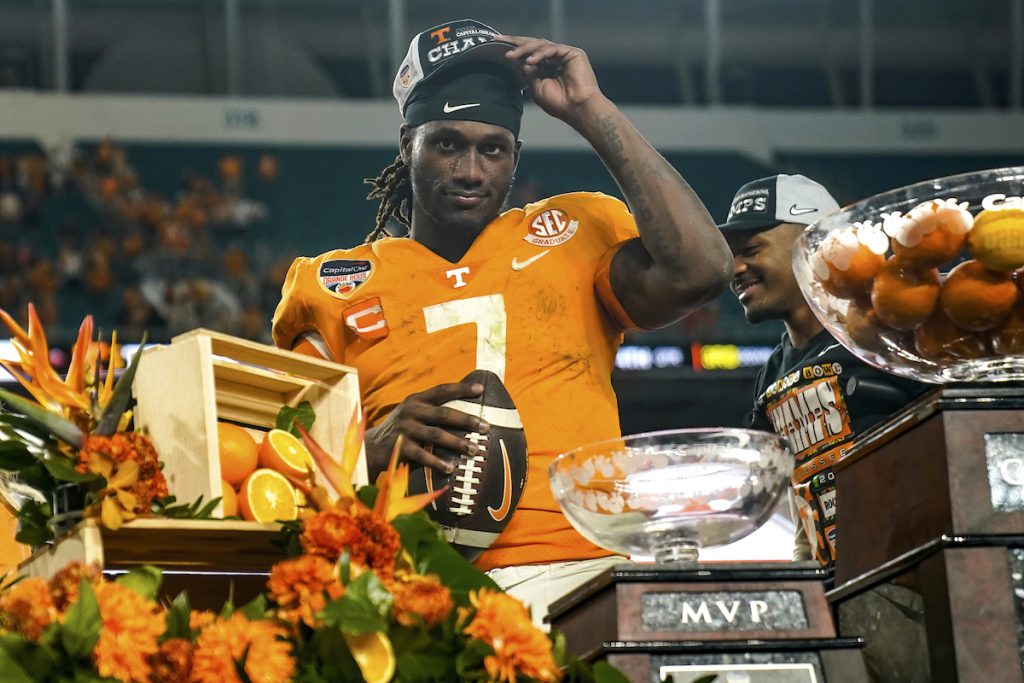 Miami, Florida – On the strength of three touchdowns, Joe Milton III led the Tennessee Volunteers over the Clemson Tigers 31-14 to win the 2022 Orange Bowl. The matchup featured two backup quarterbacks. Clemson’s Cade Klubnik marked both his first start and bowl game appearance. A stingy defense and miscues among the offense and special teams put the Tigers in an early hole they did not climb out of.

Despite being statistically superior in most offensive categories, the one that counted most besides the final score was Tennessee going four-for-four in the red zone. Klubnik was unable to find the endzone until late in the game via a 4-yard rushing TD. The signal caller completed 30 of 54 passes for 320 yards getting picked off twice. B.T. Potter, meanwhile, missed his first three field goals matching his season total in one night. For his 251-yard effort, Milton was given MVP honors.

Hitting your man flawlessly, it's been the difference maker so far tonight#CapitalOneOrangeBowl pic.twitter.com/PC7nP7N7Ps

A combination of failing-to-finish drives and three shanks by Potter plagued the Tigers in the first half. Klubnik was able to get out of trouble at times. For example, he made a 33-yard strike to Cole Turner back in the first quarter on 3rd and 14 during Clemson’s first possession. The touchdowns remained elusive, however. Milton, meanwhile, found Bru McCoy for a 16-yard TD giving the Vols an early 7-0 lead late in the opening quarter.

A flying Squirrel White with the diving catch 💪🐿 pic.twitter.com/lSQeY7jQlx

Midway through the second quarter, the Tennessee starter completed an incredible 50-yard-long dart to Squirrel White setting up the 2-yard rushing TD by Jabari Small making it 14-0 Volunteers. Clemson’s clock management to end the half was downright terrible with a freshman mistake from Klubnik. Instead of throwing the ball away, he rushed forward only to get tackled wasting the final seconds. Potter finally made a 31-yard field goal after flubbing the first three, hitting another at 40-yards in the third quarter to chip away at the lead.

Clemson went for it late in the period but Will Shipley came up short at the Tennessee 30. The Volunteers took advantage of the turnover on downs with a 14-yard TD to White, his second of the night extending the Vols lead 21-6.

The ACC Champions didn’t go away quietly. Klubnik finally found the endzone, keeping the ball to himself for the rushing touchdown. Shipley then succeeded at the 2-point conversion making it a one-score game with 10 minutes left in regulation. Tennessee answered right back via a 46-yard connection between Milton and Ramel Keyton upping the score 28-14. Klubnik and the Tigers attempted to rally on fourth down the following drive. Unable to find anyone in a rapidly collapsing pocket, the quarterback’s throw into traffic was intercepted by Tamarion McDonald sealing the conference champs’ fate. Joe Milton and the Volunteers overcame the Tigers.

Looking back to my first Orange Bowl, there was A LOT of talent on the field that night.

4 years ago we were fans representing @LemonCityLive. Fast forward to 2022, and we're now covering our first major bowl game. Not gonna lie, it's pretty rad ♥️ The view back then was great but it doesn't compare to being inside the press box💪#CapitalOneOrangeBowl pic.twitter.com/3G4tp5aqky

Charleston Rambo caught three passes for 74 yards and a TD for the Sooners. He eventually transferred to UM recording 79 receptions for a whopping 1172 yards. Averaging 14.8 yards a catch Rambo also hauled in 7 touchdowns. He was signed as an undrafted free agent by the Carolina Panthers in 2022. Rambo now plays for the Orlando Guardians in the XFL.

#PlayOfTheDay (2018): Kyler Murray shows off the skillset that turned him into the No. 1 overall pick in the ensuing NFL draft. Here he launches a beautiful pass to Charleston Rambo as he began to turn up the pressure on Alabama in the second half of the Orange Bowl. pic.twitter.com/tsBCBE6ZpR

Then we got Heisman winner Kyler Murray. In the 2018 edition, Murray put up great numbers airing out 308 yards including two touchdowns. The QB also rushed for 109 yards with another score on the ground. Murray was selected first overall by the Cardinals in the 2019 NFL Draft.

Murray currently waiting to do surgery for a torn ACL and reports indicate he is a negative influence in the locker room citing an attitude problem.

Roll Tide at the Hard Rock

Tua Tagovailoa played like an absolute legend. Completing  24 of 27 passes, Tua produced 318 yards and 4 TDs. The guy was absolutely balling. I remember the whole tanking for Tua phase when the Fins really needed a new signal caller. This year he was showing glimmers of his true potential but concussions bedeviled him and now there’s the dreaded talk of retirement.

We can’t forget DeVonta Smith! He caught six for 104 yards and a TD. At Alabama, he recorded over 1,800 yards with 23 touchdowns as a senior in 2020. Smith went to the Philadelphia Eagles. As of this piece has accumulated over 1,000 yards receiving in 2022 on 79 receptions including 7 TDs.

Last but not least, we got a fella named Jaylen Waddle. Although Waddle only recorded a pair of catches for 20 yards the wideout is now part of an electric 1-2 punch with Tyreek Hill. He was drafted sixth overall by the Dolphins in 2021. There were plenty of other guys who made it to the NFL such as league MVP candidate Jalen Hurts and Henry Ruggs III (this former Raider is on trial for a fatal DUI) making this particular Orange Bowl a very memorable one. Regardless, watching Joe Milton overcome adversity to help the Volunteers beat the Tigers was a great storyline.