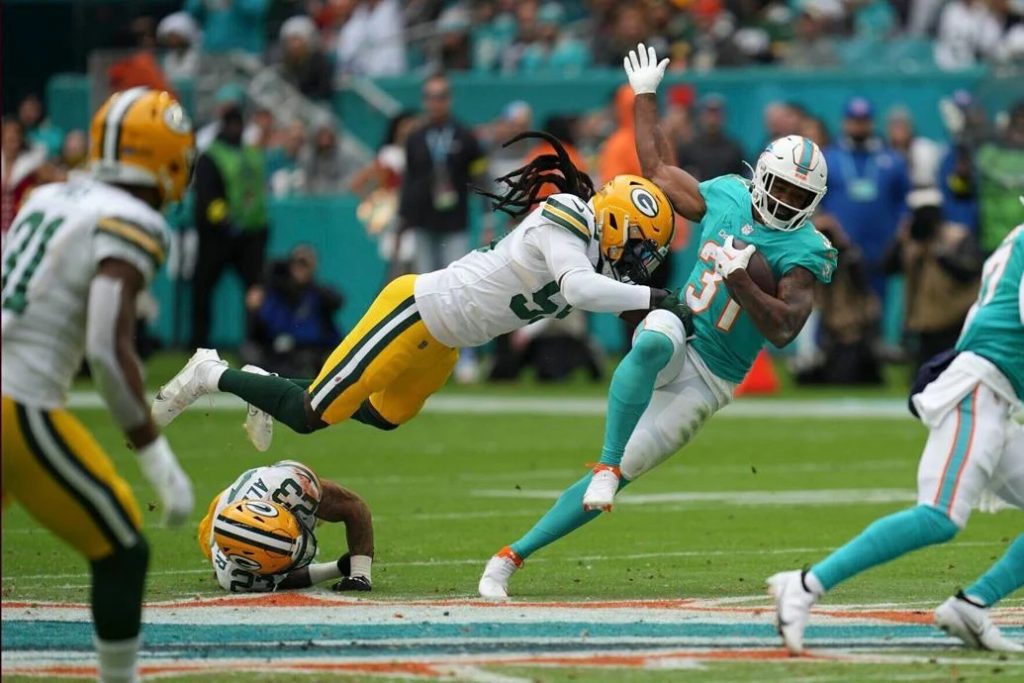 With Santa Claus dropping off presents to the good boys and girls in the morning, there was NFL football played that same evening when the Miami Dolphins dropped a close game at home to the Green Bay Packers- two teams fighting for a spot in the playoffs with little time left.

In the first half, Miami cruised to an early lead and looked to end the night with festive spirits, but Green Bay kept themselves close thanks to special teams shenanigans. In the second half, the Dolphins offense was abysmal and the Packers took advantage, scoring 16 unanswered points and handing Miami a 26-20 loss- their fourth straight.

The Ghost of NFL Playoffs Future

The majority of the AFC and NFC playoff spots have been filled, with most divisional leaders and wild card teams locking up spots up to this point, but there still are stragglers.

Prior to this game, the Dolphins, dropped three straight games against the San Francisco 49ers, Los Angeles Chargers, and Buffalo Bills. That said, the road to the playoffs for Miami is simple – win and you’re in.

Green Bay, after an unexpectedly slow start to the season, has recently won two straight games after two straight losses which brought their record to 6-8, with a chance to sneak into a Wild Card spot still a possibility thanks to a mixed bag of teams in the NFC.

An Ode to the Special Teams

Miami’s first drive of the game was nothing short of efficient, spearheaded by quarterback Tua Tagovailoa handing the ball off to running back Raheem Mostert, but also by a midfield pass to wide receiver Tyreek Hill. However, the Dolphins ran out of steam after a deep ball on third and three fell short, so they had to suffice with a 46-yard field goal by kicker Jason Sanders.

The first blunder of the day by Miami’s special teams occurred on the ensuing kickoff when missed tackles on Keisean Nixon and solid blocking by Green Bay helped drive him down to inside the 10-yard line.

Despite the incredible opening field position, a massive sack by linebacker Elandon Roberts on Packers quarterback Aaron Rodgers gave the Dolphins defense a bit of breathing room and ultimately forced a field goal by kicker Mason Crosby to tie the game up at three points each.

On the first play of Miami’s next drive, Tua slinged a checkdown to wide receiver Jaylen Waddle who turned on the jets and ran 84 yards to the house, scoring the first touchdown of the day.

Another special teams mishap occurred on the ensuing kickoff when a botched kick by Sanders skidded off the field and right into the hands of a Packers player at midfield.

Rodgers made quick work thanks to the field position and drove the ball to the goal line, but Miami’s defense locked up at the end and held the Packers on third down. Green Bay gambled early and cashed in on a touchdown pass to tight end Marcedes Lewis on fourth down, tying the game.

The red-hot Miami offense was forced to punt on their next drive, and a deep bomb by Rodgers set up Green Bay in Dolphins territory. On a fourth down play with two yards to go, Rodgers surprisingly went for a deep ball that was overthrown, causing a turnover on downs and keeping the game tied entering the second quarter.

Tua kept up the heat with a 52-yard pass to Hill to set up the Fins on the one-yard line facing the end zone. A handoff to running back Jeff Wilson sealed off the drive with another Dolphins touchdown, taking the lead right back with a score of 17-10.

Miami’s defense fended off the Packers, who were already backed up on their side of the field. On a fourth down with two yards to go, Green Bay attempted a fake punt but was stopped way behind the line to gain, setting up the Dolphins with a premiere spot. A sack on Tua denied another chance to score a touchdown, so Sanders kicked a 34-yard field goal instead.

After another Packers punt, Tua looked to lead the offense to one more score with two minutes to go in the first half. However, a fumble by Mostert was recovered by Green Bay, who was able to sink in one more field goal before halftime to cut the lead to 20-13.

Crashing Down the Chimney

Rodgers and the Packer offense clearly made some second-half adjustments, because they marched right down the field, and after a handoff to running back to AJ Dillon, scored another touchdown to tie the game once more.

Miami slowly progressed the ball across midfield, but the offensive line gave up a lot of pressure on Tua down the stretch, forcing a field goal by Sanders that he missed, creating momentum for Green Bay, something that was in short supply in the first half.

The Dolphins defense did their best despite the excellent field position for the Packers. After a holding play and more negative yardage, Rodgers was forced to go long on third and 15, with a pass into the end zone being intercepted by Miami cornerback Kader Kohou, stopping Miami’s bleeding for a short time.

What followed this drive was nothing short of disastrous for Miami’s offense, as Tua threw three interceptions on their next three drives in the fourth quarter. The first pick was thrown on the first play following Koho’s interception, setting up Crosby to score another field goal, giving the Packers their first lead of the day.

Tua and the Dolphins offense looked to bounce back on their next offensive possession, running up the field but burning clock in the process. On a second and 13 around midfield, Tua rifled another bad pass to the Green Bay defense, keeping the Packers lead at 23-20 with six minutes to go in the game.

Miami’s defense did everything it could to keep the Packers out of the end zone, and they did just that with two minutes to go, forcing another field goal to only extend the lead to 26-20.

The Dolphins looked to the two-minute drill to win the game, but the second play of the possession was another Tua interception, this time closing out the game and granting Green Bay the Christmas Day win.

Another INT for the #Packers!#GBvsMIA | #GoPackGo

Tua recorded 310 yards and one passing touchdown for the day off of 16 completed passes, which was solid. But three picks in the second half let the Dolphins down and gave all the momentum left in the game to the Packers.

Both Mostert and Wilson ran for a combined 82 yards and a single touchdown. Both Waddle and Hill recorded over 100 receiving yards each.

For the Packers, Rodgers had a premiere day with 238 yards and 24 completions off of 38 attempts, though no wide receiver or running back recorded over 100 individual yards.

A Dark Future for Tua Tagovailoa

The day after the game, head coach Mike McDaniel announced that Tua has entered the concussion protocol and will likely not play in Miami’s upcoming game against the New England Patriots on Sunday, January 1st at 1 PM.

While it’s not 100% certain when Tua suffered a concussion in the game against Green Bay, many people are pointing to a play with less than three minutes to go in the first half, when Tua is tackled from behind, and the back of his head slams into the ground.

This would seem to be the play on which Dolphins’ QB Tua Tagovailoa was injured, when his head bangs the ground. pic.twitter.com/zCQXadHm2r

This is likely the third head injury that Tua has suffered this season, after a possible concussion right before halftime in Week 3 vs Buffalo, as well as the following week vs Cincinnati which kept Tua out of play for three weeks.

It’s believed that backup quarterback Teddy Bridgewater will get the majority of snaps in practice and will start vs the Patriots on Sunday.

Miami experienced another game where they had the advantage at some point in the game and then it all came crashing down. It was a bit extreme against Buffalo last week, but the Green Bay really felt like their game to win from the start.

The offense looked great and the defense was solid as well. But the Dolphins did the unthinkable and let the Packers hang around, and it ultimately cost them in the second half.

This was spearheaded early on when the special teams had the worst game so far this season, with two botched kickoffs and a missed field goal. After a performance like this, it’s no surprise why Miami’s special teams is regarded as one of the worst in the NFL.

Ultimately, however, the game came down to Tua’s performance in the second half, and it was as poor as it could be. It doesn’t matter what level of football is being played, four turnovers in a game- three by Tua himself is going to make it difficult to win a game.

My thoughts on Tua’s performance are brief. They were extremely negative following the game, but with the news that he’s in concussion protocol, my feeling has shifted again. If he really was concussed in the second half, that explains a lot about how he struggled.

I watched my draft-mate, Luke Kuechly, retire at age 28 after three concussions.

For a quarterback that played as well as he did, throwing the ball to wide-open Green Bay defenders seems unbelievable, and the fact that he was concussed might explain it. For now, I worry about Tua’s overall health and his ability to not only play football later this season but again in his career.

Despite this setback and four straight losses, the Dolphins still have a good shot to make the playoffs. If Miami beats New England next week and the New York Jets lose to the Seattle Seahawks, they’re in. If Miami wins out, beating New England and the Jets the week after that, they’re in. 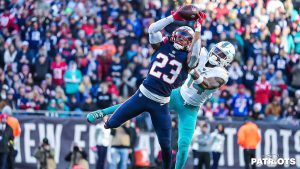 Dolphins Fall to Mediocre Patriots, Knocked Out of Playoff Spot 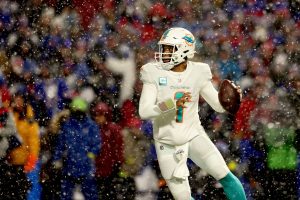 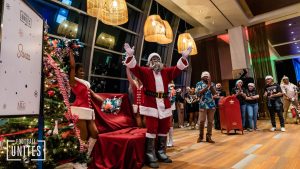