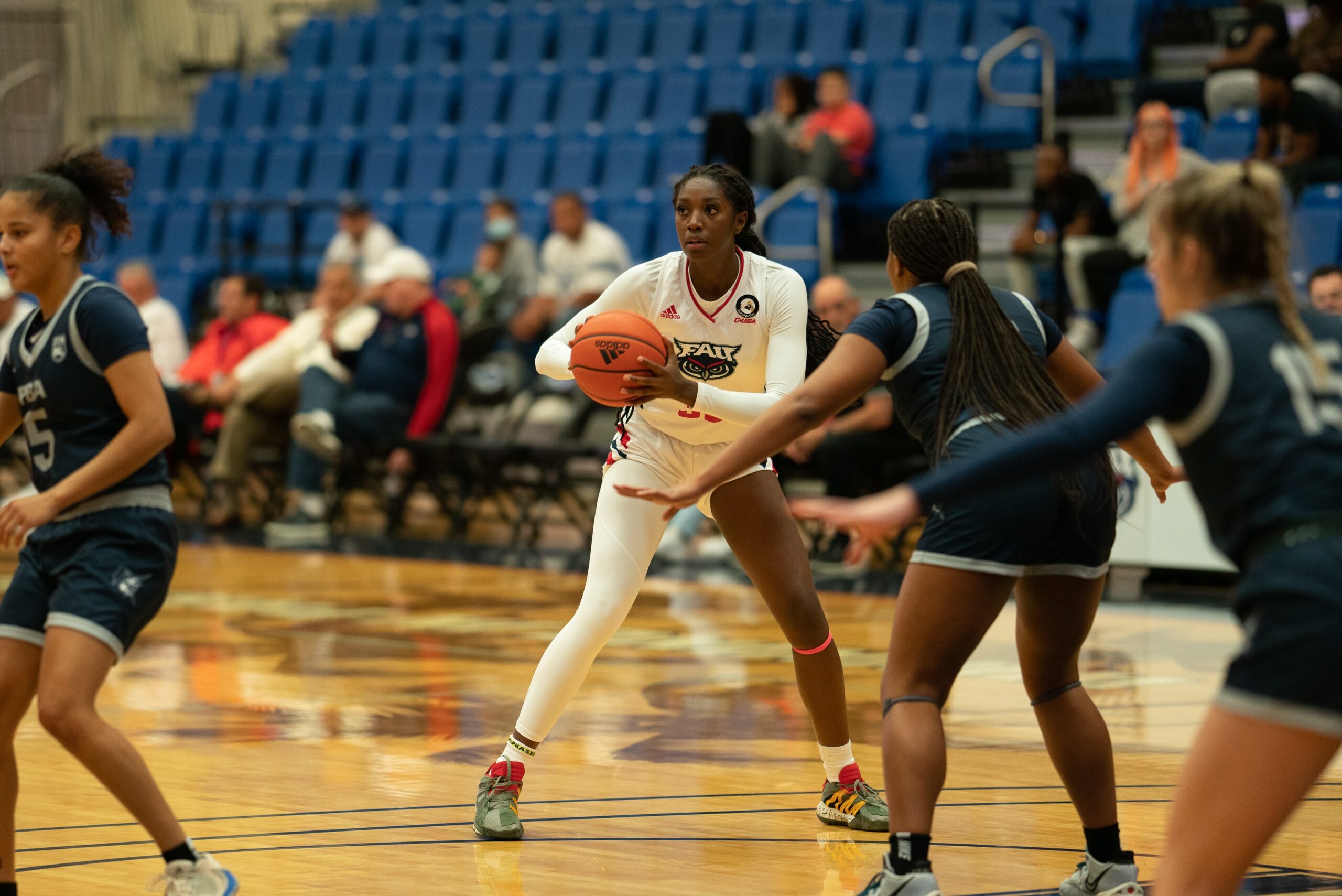 Both FAU men’s and women’s basketball teams opened their seasons Wednesday night, each to a different outcome.

For the men, they suffered their first loss of the season as they fall to the New Mexico Lobos, 99-92.

Let’s take a look at both games and hear what both head coaches had to say afterwards.

While the score might suggest an utter domination by FAU, the Owls started off very sloppy on both sides of the floor. Turnovers and missed free throws plagued the Owls in the beginning, but they got rid of the jitters quickly.

The Owls then put up a great performance offensively and defensively that led to Sullivan’s first win. She talks about what the win means to her and the players:

“It’s very exciting. I was excited for the girls, but I told them in the locker room that you will just never forget the first one,” Sullivan said. “I’m really thankful to have the opportunity to be here and to get the first win in that way with that group.

#FAU HC Jennifer Sullivan gets her first win at the school. Says she’s excited for it, but also for the players. Says she told the team that you’ll never forget the first. https://t.co/HQBRtR782D

Amber Gaston proved to be the star player she was touted to be against Palm Beach Atlantic, recording a double-double with 15 points and 13 rebounds. It’s the first double-double in her career, which she obtained in the first half collecting 10 each.

“Since our staff got here this summer, [Amber] has worked her tail off every single day. She has been consistent, so that’s step one, and I think step two is that she is older and has been in the system a long time. She kind of knows what is coming so we are reaping the benefits from her age.”

Was told after the game that it was the first double-double for Amber Gaston (@agaston32) in her career. She achieved that in the first half. #FAU https://t.co/dtwN9PIoS3

Rita Pleskevich tied Gaston for the lead in scoring and really came together in the second half with her mid-range game, as she went seven for 11 from the field. When asked if she can be a go-to scorer this year, Sullivan said that she would hope so and besides her, Gaston and Alexa Zaph, who scored 10 points and had three assists. Bre Beck also contributed with her eight assists.

The defense for the Owls was arguably the best aspect against Palm Beach Atlantic as they held them to 19 percent from the field and 10 percent from deep.

“We want to be strong on either side of the ball. Going into the game, the goal was to hold them to 52 [points] or lower, so obviously we were below that and did a good job with that. But defensively, we aren’t going to be the biggest team, but I do think from the perimeter, we are pretty long and I think our kids play hard. So we are going to try to get a lot of stops.”

There was a lot to like for the Lady Owls, but some glaring issues involved them turning over the ball 18 times and only shooting 70 percent from the charity stripe. They could’ve afforded to lack in those areas because of the competition, but facing opponents within the conference or tougher teams out of the conference, it could come to haunt them.

Coach Sullivan talks about the glaring issues she saw and other aspects she wants to see the team develop heading into Saturday’s matchup against Bethune-Cookman.

“Yeah, I mean, we could stay here all night. You know, but obviously the turnovers were the most glaring. I didn’t think our box outs were great. I thought we kind of got out of sorts a little bit when we tried to attack and transition, but didn’t have anything, so it took us a while at times to getting our stuff back, but again, all that stuff will get better and the more film you have the better, because we’ve been watching a lot of practice film and getting more film of other people, that’ll help.”

She predicts that turnovers won’t remain a constant issue as the coaching staff tried different lineups throughout the game.

They’ll try to remain undefeated at home this season as they next face Bethune-Cookman on Sunday at 2 p.m. in Abessinio Court at FAU Arena.

1-0 start to the season 🔥 pic.twitter.com/qIHUFOZChe

With the women’s game ended around 8 p.m., an hour later, the men’s side looking to continue the celebration. However, that didn’t happen.

Blame the University of New Mexico.

No one could stop New Mexico in that second half.

The first half saw the FAU and the Lobos go back and forth with one team trying to get the advantage over the other. The second half saw an offensive explosion from New Mexico.

New Mexico’s Jaelen House blew up for 30 points, six assists, and three rebounds. Head coach Dusty May warned the media about House and the Owls saw first hand. Him and the supporting players around him didn’t seem to miss in the second half as even besides the suspect defense, they were really unstoppable.

May talked post-game about what they could’ve done differently against House and the Lobos:

“We probably could have trapped him a little bit more and got it out of his hands, but that’s a challenge when the other guys are making shots. You can’t let him get 30 and the other supplementary guys get close to 20 each like they did so sometimes you gotta let him get his points and shut down the other guys. It’s disappointing when you’re not able to do either. And that was the case tonight.”

Even though FAU couldn’t match the offensive efficiency of New Mexico, there were some bright spots. Guard Michael Forrest scored 26 points, collected six rebounds and got four assists. ECU transfer Bitumba Baruti made an impression in his first game with FAU as he scored 15 points along with nine rebounds.

Guard Bryan Greenlee was out against New Mexico as Alijah Martin started in his place, a scenario that May said in his pre-game presser. He’s considered day-to-day.

Starting lineup for the season opener. Alijah Martin is in, meaning that Bryan Greenlee is probably out. #FAU HC Dusty May did say Martin would be in if BJ was out. https://t.co/4CCPiYJIhv

May didn’t think the team played bad, in fact, he thought they were in a position to win the game. Though, he credits mistakes like the 17 turnovers that cost them.

“We expected to win, and it was a hard fought game. I thought we competed well enough to win. We just made too many mistakes. But I think we learned a lot about ourselves. So that’s the objective to come on the road and play these hard games there to learn about yourself and then to see if you can apply what you learn about yourself and continue to improve them because our season is long, and if you can just progressively get better and better and better, you end up being a great team by the end of the year if you’re just good every single day. So that’s what we’re going to do is try to make adjustments and see how quickly we can adjust on the fly. But I’m excited that we learned a lot about our team and going forward you got to figure out what you’re not good at and then sometimes, some things you’re better at than you thought, jumps out at you so you have to take better advantage of those situations as well. I love this team. These guys are going to work. They’re going to compete. They’re going to be together for each other. So I think we’re going to have a very good season. We just got to clean up a few things and obviously improve defensively. But this team has a high ceiling.”

The Lobos shot 53 percent from the field and 52 percent from deep, they were on one. So when May talks about fixing up in the defensive department, it’s accurate.

While May sees the benefit in these losses, he doesn’t see it as a blessing in disguise:

“Definitely not a blessing in disguise. We want to be on the other column at the end of the night on the scoreboard. We’re past moral victories, that’s not what we’re about. We’ve earned respect already as a program. These teams respect us, now it’s time for us to take the next step and start beating these teams consistently.”

The Owls will just have that chance to get back in the win column as they’ll face Warner on Saturday at 4 p.m. at Abessinio Court at FAU Arena.

Home opener is next, this Saturday, at 4 p.m. against Warner pic.twitter.com/4w7PcYfU8K