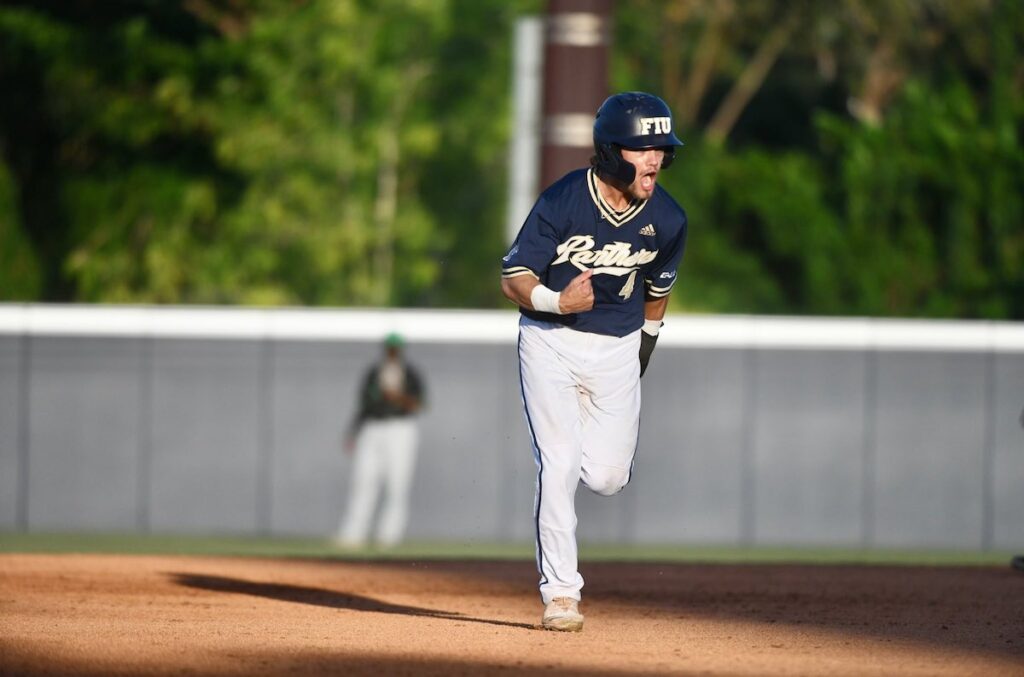 Miami, FL – Robert Sotolongo redeemed himself from an early game fielding error blasting an uplifting grand slam to help FIU torch Marshall 11-3. The win over the Thundering Herd finally ended a painful 11-game losing streak improving their record to 8-12. They opened conference play on their fifth weekend of the season and are poised to take the series on Sunday.

Ryan Cabarcas faced off against Patrick Copen in a bout that saw neither pitcher last past the second inning. Richie Pena picked up where Cabarcas left off tossing three scoreless innings with assistance from David Eckaus who weaved four effective frames in relief. Florida International’s pitching staff put up its best performance since its series opener versus Jacksonville on March 11.

What was supposed to be a routine base hit turned into a triple in all but name for Travis Sankovich, scoring two. Sotolongo let the ball roll under his glove in left field resulting in the costly error. Cabarcas issued the bases-loaded walk to Cole Williams in the second frame making it 3-0 Marshall.
Despite falling behind the Panthers exploded for eight runs in the second.

FIU almost blew it on Rey Hernandez’s single with two men on. Matthew Gonzalez raced to third only to see that Jorge Ramirez did NOT go for home. He was caught in a rundown but Ramirez took advantage of the distraction and snuck his way across the plate. The Thundering Herd realized it too late and no one was tagged out in the end.
Sotolongo then made amends for his defensive mistake. He took Copen deep to left field for the morale-boosting round-tripper giving his team the 6-3 lead. After Ramirez hit an RBI single, Gonzalez’s liner ricocheted off the third baseman Sankovich’s glove scoring another run.
The blue and gold turned to the bullpen in the third. Pena ran into trouble walking Geordon Blanton to load the bases but the sophomore righty regained his composure punching out Luke Edwards getting out of the jam.
Hernandez struck again in the fourth this time with a solo shot to right field extending the Panthers’ lead 9-3. Florida International pounced on a throwing error by the new third baseman Eddie Leon adding two more runs after the seventh-inning stretch.

B7 | The Herd third baseman throws it into right field!!!

Both Panthers will score!

Finally, the losing streak ends! It’s been a real rough stretch of games for the Cats. The hitting wasn’t really the issue but the pitching has been a real stinker. It was great to see the staff finally step up. I can’t imagine the mood in the clubhouse leading up to today’s game. Kudos to the squad for staying hungry. For several contests, they put up quite the fight only to walk away with the loss. The W proved painfully illusive heading into C-USA play.

Tasting victory for the first time in almost a month (Feb. 25 versus Seton Hall) the boys can clinch the series in the rubber match. Who knows, maybe they bounce back and start winning. The schedule says otherwise with LA Tech next weekend and Old Dominion after that. Still, it’s baseball. Anything can happen. With high morale, even the underdogs can pull off wins.

A relatively quiet night from Alec Sanchez although he did draw two walks and nearly lifted one over the fences in the fifth.