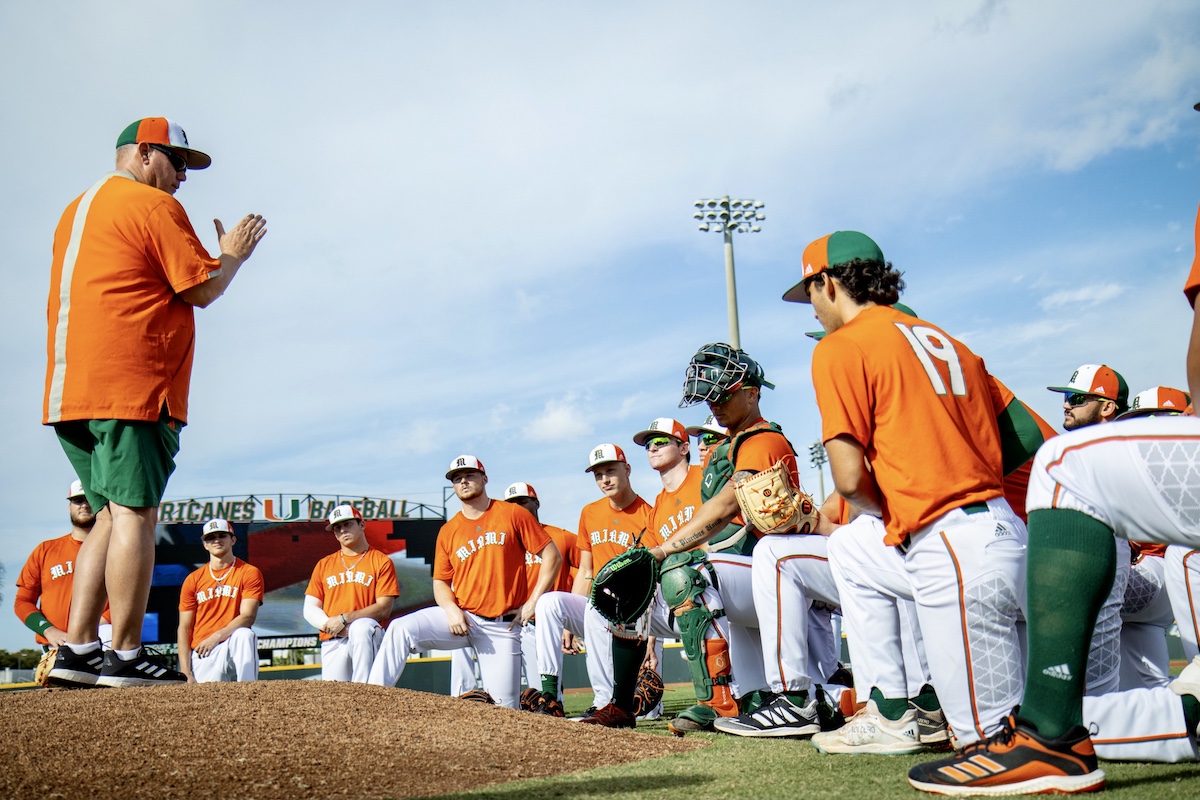 Miami, Florida – It’s February and that means another Canes season is right around the corner as avid fans count down for the start of college baseball. 2021 ended in disappointment as UM fell flat in the Gainesville regional. Since then a slew of players either finished their college careers or transferred out, leading to a lot of new faces on this young ballclub. After finishing last season 33-21, the Miami Hurricanes have cracked the Top 25 preseason rankings for four major publications: Perfect Game (No. 18), D1 Baseball (No. 25), Collegiate Baseball (No. 23), and Baseball America (No. 25).

For the new guys, it’s all going to be about making a positive impact as quickly as possible when the regular season begins. For the veterans, particularly those coming from a down year, it’s to continue player growth honing their skills. Miami finished 2021 ranked 6th in runs scored with the fourth-best ERA (4.40) from the pitching side.

The bullpen has depth as all eyes will be on the starting rotation and the hitting. The Canes struggled mightily at the plate during the 2021 ACC Baseball Championship lasting through the regional. UM finished in the back half of the ACC when it came to batting average (.263) finishing 10th in home runs (56).

A transfer from Vanderbilt, Maxwell Romero Jr. brings College World Series experience. The Miramar native was ranked the fourth biggest transfer in the country by D1 Baseball and the highest of any newcomer in the conference. The junior year catcher is a left-handed power hitter with a very strong arm. According to coach Gino DiMare, Romero Jr. has the experience and desire to be a leader in the clubhouse during the regular season. He didn’t play much for the Commodores, appearing in 21 games making 15 starts but the backstop had a .300 batting average complemented by four dingers.

Team Orange takes a commanding, 13-2, lead after day one! Maxwell Romero, Jr. blasted a pair of 3-run homers and Alejandro Rosario tossed five innings of one-hit baseball. We pick things up at 11:15 a.m. on Saturday. pic.twitter.com/a0Vb5Z6jTS

So we got us a southpaw from St. John Fisher College. Matt Raudelunas hails from Madison, New Jersey, and was a top prospect in Division 3 baseball. However, early into the 2020 season, Raudelunas tore a ulnar collateral ligament in his pitching arm requiring Tommy John surgery. Due to the COVID pandemic, he had to wait months before a doctor could perform the procedure causing him to miss the entirety of the 2021 season. Offered to play for The U, the lefty posted the second-lowest ERA among his teammates during fall ball, yielding only one earned run across 8 1/3 innings pitched. He should offer great depth to the bullpen.

ICYMI: He had nowhere to live yet. No idea what to expect.

But Matt Raudelunas knew playing at Miami would bring him one step closer to realizing a lifelong dream.

There are a lot of emotions in this story. Dorian Gonzalez Jr. has a strong personal connection to pitching coach J.D. Arteaga. He was lifelong friends with his son Ari Arteaga who died in a car accident at the age of 16. Less than a week after the devastating tragedy, the Miami native decided to become a Hurricane. The freshman middle infielder is not the first in the family to wear green and orange. His father is Dorian Gonzalez Sr. who played at Miami from 1994-96 as a lefty pitcher. Gonzalez made the CWS all three years too. Will the son be as fortunate?

Hailing from Belen Jesuit, the youngster hit above .300 throughout his entire high school career earning all-district honors every season. Senior year was his best hitting .364, playing a major part in leading the school to the ship. He’s got a good approach at the plate with great instincts to put the barrel on the ball according to hitting coach Norberto Lopez.

At the plate for Team South Florida, 2021 SS @canesbaseball Dorian Gonzalez, Jr continues to show well this weekend! Stroking a 2B to RCF. pic.twitter.com/pjsyrxb0dW

Another lefty looking to be a part of the starting rotation. According to DiMare, Rafe Schlesinger has a lot of potential. Perfect Game saw him as one of the best left-handed pitchers in the state of New York. Considered a highly sought-after individual, Arteaga believes his already formidable velocity will go even higher during his continued growth. Now that the freshman from Holbrook, New York is playing for his dream school he intends to prove his worth. Schlesinger recorded 12 strikeouts during the fall. If he fails to become a starter, it’s likely he’ll be one in 2023.

University of Miami freshman Rafe Schlesinger (Sachem East 2021) getting a bullpen in before heading back to school. Fastball was up to 94.2 via Rapsodo. He won the Paul Gibson Award this past year pic.twitter.com/RPfQkRyAgi

I had to mention this individual. Alejandro Torres is a transfer from my alma mater Florida International University. The right-handed sophomore doesn’t have a lot of playing time in his college career, appearing just five times for the Panthers in the COVID shortened 2020 season. It’s a very small sample size but Torres tossed seven scoreless innings punching out 10 acquiring two saves. Opposing batters were hitting a minuscule average of .087. That’s pretty good stuff for such a brief stint. He spent the following year tending to an injury but is considered a top South Florida prospect according to Perfect Game.

With a year at Coral Gables under his belt, CJ Kayfus looks to become a productive everyday starter. Slashing .298/.375/.509 in 40 games last season (making 10 starts) Kayfus recorded three HRs, six RBIs, and a stolen base. He is one of several sophomores looking to break out in 2022. This fella literally started his college career with a bang, hitting a solo shot on their first-ever collegiate hit at NC State. Kayfus became the first Hurricane to achieve such a feat since Alex Toral in 2018. He got playing time at both first base and right field freshman year.

Here's a look at the pivotal slide by CJ Kayfus at 1st base during the 9th in the walk-off win over FGCU pic.twitter.com/UTnIPvwVyx

Having made First Team All-America (and second) in several publications, the reliever returns to The U for another season. This time it’s possible he becomes a starter. Carson Palmquist made 25 appearances as the closer for the Hurricanes going 1-1 with a 2.22 ERA over 44.2 innings. Notching 14 saves, the lefty was third-best nationally topping the ACC. Palmquist fanned 75 batters walking just eight for an incredible 9.4-to-1 K/BB ratio, averaging 15.1 strikeouts per nine innings pitched. Holding opponents to a .143 batting average you can see why they want him to anchor the rotation. Let’s hope this isn’t a repeat of what happened to Daniel Federman.

Carson Palmquist strikes out the final three batters for his sixth save in six opportunities. pic.twitter.com/2FgsY0sdff

Another of the sophomores looking to flourish after their first year, Alejandro Rosario had 15 appearances (11 of them starts) for UM going 6-4 with a 5.21 ERA over 65.2 IP. Rosario was the first freshman to start on the mound on opening weekend since Bryan Radziewski in 2011. His 6 victories were tied for most on the team, K’ing 55 giving 28 passes. Entering the program as a top recruit Rosario displayed a few dominating starts his rookie season. Opponents found success against him hitting .283 but the right-handed hurler is expected to do big things going forward.

Plenty of punchouts from Pipo 🔜 pic.twitter.com/cyrt4rT5KN

The big man was lights out in 2021. In his freshman year, Andrew Walters pitched 24.2 innings and came out with a sterling 1.46 ERA. This was done over 19 appearances on the mound which includes a singular start. Walters fanned 36 and walked nine holding opposing hitting to a .221 batting average. Pretty good if I do say so myself. The second-year Cane had a strong start to his Miami career going nine scoreless innings in seven straight appearances. The return of this key arm is a boon to UM’s pitching.

Another of the possible “super sophomores” Yohandy Morales was the Canes’ primary third baseman making 53 starts. Check this out, Yoyo led the team in doubles (13), triples (3), home runs (11), and RBIs (45). This was done as a true freshman. Morales’ batting average was .284 leading the team with 44 runs scored. Still skeptical on his prowess at the plate? Okay. He also led the team in slugging (.532) posting an .874 OPS ranking second among the ballclub for most multi-hit games (17). The kid also achieved an 11-game hitting streak. He’s just getting started headlining Miami’s offense in 2022.

5⃣ weeks, 3⃣5⃣ days or as we like to say Yohandy Morales days away from Opening Day! pic.twitter.com/PNcWo5P1Gb

Say hello to the workhorse. Jake Garland operated out of the bullpen as a true freshman then made 13 starts in 2021 (16 appearances total) going 6-4 with a 5.69 ERA over 68 frames. Garland struck out 38 and walked 14. It’s still a work in progress but the third-year sophomore is expected to improve. His numbers (and those of others) aren’t too impressive but considering his quality starts against UNC and Louisville Garland can be of great service as another option on the mound.

Looking at the schedule

Miami will spend the first four weekends at home. During that span, the Florida Gators will serve as an early test. At a minimum, they should be 7-1 by then with games against Towson, Florida Atlantic, and Harvard accounting for a “shaking off the rust” moment. They begin ACC play around mid-March hosting Boston College with several interesting matchups thereafter. On April 1-3 they will face defending 2021 ACC Champion Duke on the road. Riding into 2022 with high expectations, the Blue Devils have an impressive lineup with depth at the mound. At the end of the month, they face Georgia Tech.  The Yellow Jackets are a talented team with at least three potent players at the plate (Kevin Parada, Andrew Jenkins, and Drew Compton). They won the Coastal Division last year and with a lot of their roster slated for the MLB Draft in July their time to win is now. We also can’t forget the home and away series with FIU on March 8 and April 6 in the Battle for the 305.

While The U does not play Louisville this year they will face Notre Dame at home to end the season. Finishing 34-13, the Fighting Irish clinched the Atlantic Division, coming up just short in the Starkville Super Regional against the eventual College World Series champion Mississippi State. Ranked No. 4 in Baseball America’s Preseason Top 25 you can bet this will be an intriguing weekend series to conclude the year.

Despite their youth, the boys should mesh well and finish dare I say 39-16 making a pretty strong run for the wide-open coastal. Don’t count on an ACC Championship though, however, they’ll certainly make it to at least the regionals. Will they host it? That largely depends on how the Top 25 shakes out in the end but I don’t think Coral Gables will be a site. With such a young team there will definitely be hiccups. Don’t be surprised if you see it versus Florida early on. I’m very interested to see what kind of season Morales, Palmquist, and Romero Jr. (and Jacoby Long) will have.

UM has done great via recruitment so there’s plenty to look forward to. The freshmen, returning players, and transfers will need to step up if they want to dive deep into the postseason.