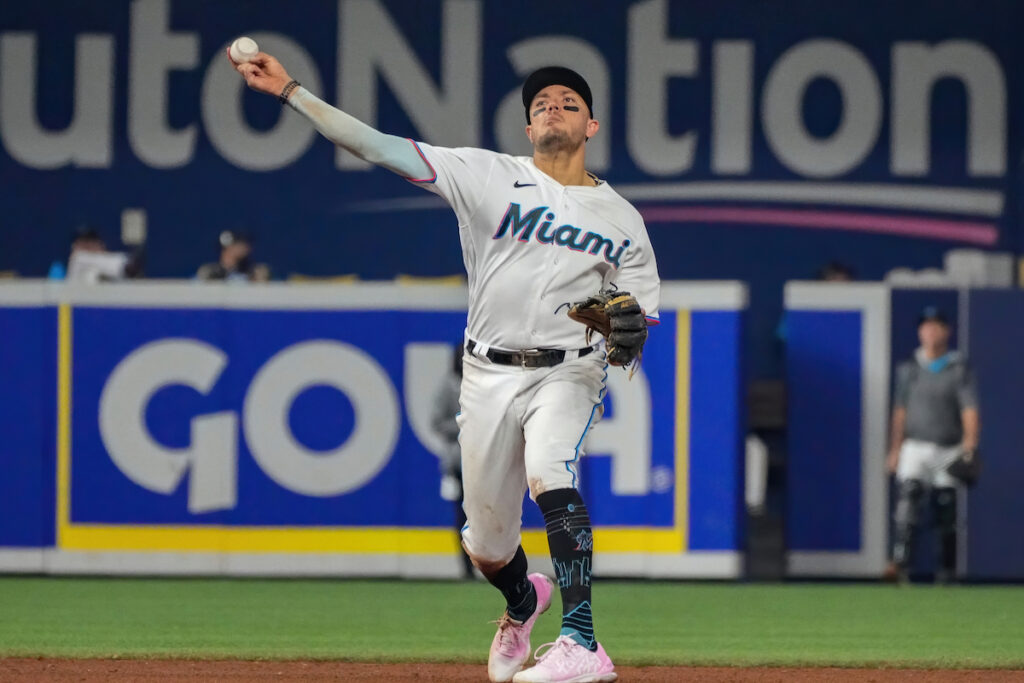 Miami, FL – After Sandy Alcantara and the Marlins’ offense took care of business in game one against the Washington Nationals, Miami looked to get the series win with Cody Poteet on the mound. Poteet has primarily been used as a long reliever out of Miami’s bullpen but was making his first start of the season. Leading up to his start, Poteet shined in his role pitching 16 1/3 innings and had a 0.55 earned run average.

All Hands on Deck

Poteet was making a spot start in place of the injured Jesus Luzardo. Fortunately for Miami, their bullpen was fresh and rested after Alcantara pitched eight innings the night before. Spot starts can be difficult to manage with all the bullpen arms and matchups to worry about. Poteet was able to silence any doubts and answered the bell from the very first inning.

Poteet did his best Alcantara impersonation from last night and retired the first 10 batters he faced. Miami’s starter completed the first inning on just six pitches! He was cruising through the first four innings until he was pulled out in the fifth unexpectedly. Poteet was able to get the first two outs of the fifth but it was later found out that Mattingly removed Poteet from the game due to a thumbnail issue.

Anthony Bender was the first reliever out of Miami’s bullpen and was able to get the final out of the fifth by striking out Maikel Franco. Including Bender, Miami used five relief pitchers to finish Poteet’s start. They combined to pitch 4 1/3 innings and gave up only one run. Miami’s relievers surrendered six hits and walked three batters, but got crucial strikeouts in key moments.

Washington’s lone run came in the eighth inning off of Anthony Bass, but Tanner Scott made sure it stayed that way. If it wasn’t for his injury, Poteet’s start could have lasted a bit longer. His pitch count was only 54 pitches. Poteet’s final stat line was 4 2/3 innings pitched with four strikeouts. The only baserunners he allowed were an infield single to Juan Soto and a walk to Yadiel Hernandez. The bullpen took care of the rest.

Stay Ready and You’ll Be Ready

Miami had a couple of players going into the game that were struggling offensively. It didn’t get any better the way Washington’s starter, Joan Adon, opened the game. He exchanged zeroes on the scoreboard with Poteet through the first four innings and allowed only three hits during that stretch. With the game tied 0-0 in the fifth, Miami struck first with their captain coming through at the perfect time. On a 1-0 count, Miguel Rojas launched his second home run of the season to give the Marlins the lead.

Against all odds, Miguel Rojas homers to left. A blast. 1-0 #Marlins

Ball left his bat at 102.7mph and traveled 394 feet. pic.twitter.com/dtFnQLimso

Another player that is slumping in the worst of ways is Jesus Sanchez. After a terrific month of April, Sanchez has come back down to earth and has gone cold at the plate in May. Bryan De La Cruz was getting the start in center field in place of Sanchez, but De La Cruz was hit by a pitch. He would stay in the game to run on base but was taken out the following inning. He has been listed with a right forearm contusion.

Bryan De La Cruz was removed from the game and replaced by Jesus Sanchez after being hit by a 96 mph fastball directly on the back elbow.#Marlins pic.twitter.com/ZlqTtqHDvS

Sanchez was now thrust into the game unexpectedly but stayed ready when his number was called. In the bottom of the sixth inning, Sanchez was facing former Marlin, Steve Cishek. With two outs in the inning, Sanchez doubled the Marlins lead with one swing.  The lefty went deep on a 2-2 count and took advantage of a hanging slider by Cishek.

See ya later! Sanchez off the bench and it's 2-0 Miami.

In-game one of this series, the Nationals had two throwing errors in an inning that allowed Miami to clear the bases loaded and give the team an eight-run lead. The Marlins took advantage of more defensive miscues in the seventh inning of game two.

Rojas led off the inning with a double and advanced to third on an error by the pitcher, Erasmo Ramirez. Erik Gonzalez was bunting Rojas over to third, but Ramirez was not able to field the bunt and was charged with the error.

Ramirez made another error a few moments later when he threw wide of first on a pickoff attempt. Rojas was able to score easily and Gonzalez hustled to third. Josh Bell had a throwing error trying to get Gonzalez out and his throw went into shallow left field in foul territory and Gonzalez was the fourth run Miami scored.

After the Nationals scored one in the eighth, Miami responded in the bottom half. Brian Anderson doubled to right-center field with one out. After Sanchez grounded out, Jacob Stallings brought Anderson in with a single to center field. The score was 5-1 and it remained that way until Cole Sulser got the final out of the ballgame.

Pablo Lopez is set to make his eighth start for the season in the series finale tomorrow and still leads Major League Baseball with a 1.05 ERA. Washington’s record is now at 12-26  and Miami has won all five matchups against the Nationals this season. These are the type of games that teams fighting for a playoff spot should win. If the Marlins handle their business tomorrow, they will be just one game under .500. First pitch is at 6:40 pm.