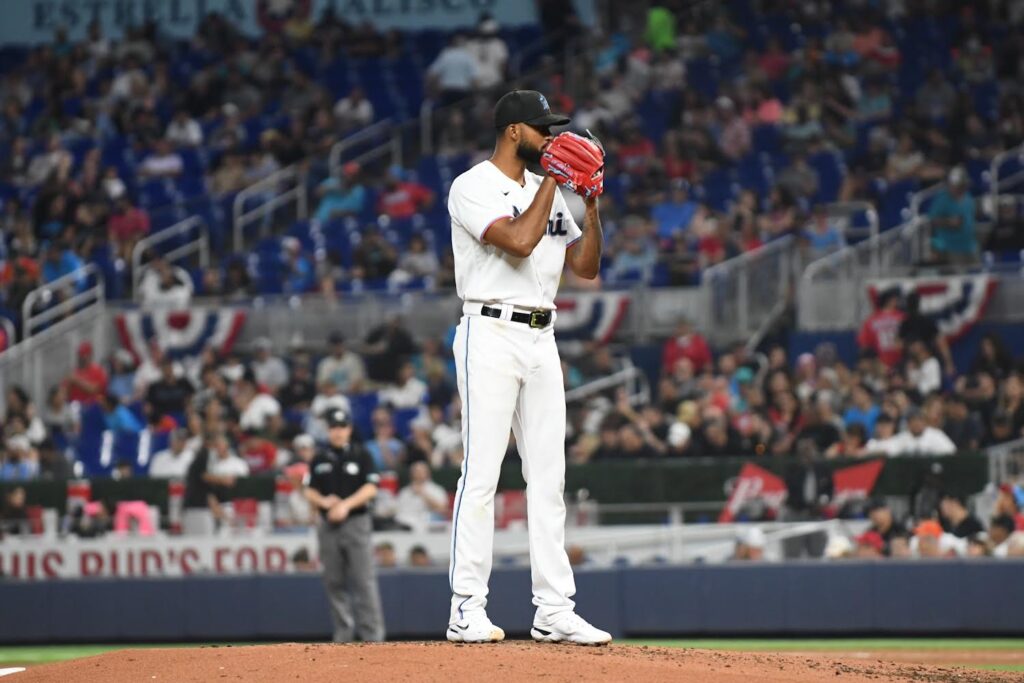 Miami, FL – There’s nothing quite like the energy on Opening Day in Major League Baseball. The Miami Marlins had their home opener last night against the Philadelphia Phillies after starting the season on the road. Miami entered their home opener with a 1-4 record. The Marlins were in desperate need of a win and luckily they had their ace, Sandy Alcantara, on the mound.

The energy before the first pitch of the 2022 home opener felt a lot more different than other Opening Days during the Marlins/LoanDepot Park era. There were activities and games for fans to interact with and some Marlins, like Pablo Lopez and Elieser Hernandez greeted fans as they entered the stadium.

The flag is out, lineups are presented, It’s time to play ball! @Marlins vs @Phillies 2022 Opening Night for the Fish with their ace Sandy Alcantara on the mound. @LemonCityLive @MLB #LetsGoFish pic.twitter.com/IukzsVPqey

The Marlins had a packed house for their Opening Day and the fans were bringing it from the very beginning. The only time I can remember the stadium being this full and loud was the home opener in 2012 when the Marlins became the Miami Marlins.

Miami got to flex their new LED light system before the game to hype up all 31,184 fans at the park. It brought new excitement to the crowd that definitely brings out the energy Miami fans have. The pregame celebrations set the tone for a very competitive game. The Marlins not only dished out some dough on their stadium, but they also did so on their roster over the offseason.

Fans in Miami finally got to see newcomers like Avisail Garcia, Jacob Stallings, Joey Wendle, and Jorge Soler. Garcia and Soler were acquired in free agency while Stallings and Wendle were acquired in trades. It’s somewhat of a new-look roster with some extra thump in the lineup.

First look at the new lights installed at loanDepot Park. @Marlins taking the field for the first time at home in 2022! Enter the Sandman @LemonCityLive #LetsGoFish pic.twitter.com/tFzi0bCDwn

Miami’s Ace Up Their Sleeve

The Marlins are off to a rough start in their 2022 campaign. After winning just one game in their five-game road trip, Alcantara’s start couldn’t have come at a better time. Sandy looked shaky to start off the game giving up two hits and a sac-fly to Bryce Harper. The Phillies were making loud contact off Alcantara but the big right-hander settled down after he got out of the first inning jam.

Alcantara would go on to pitch five shutout innings after giving up that one run in the first. With his pitch count at 88, Manager Don Mattingly let his ace go out for the seventh. After getting the first out, Alcantara hit a batter and Mattingly did not hesitate to go to his bullpen.

Steven Okert was brought out of the pen as the left-handed option, with Philadelphia’s outfielders, Kyle Schwarber and Bryce Harper due up to hit in the inning. Okert struck out Schwarber but walked J.T. Realmuto. Next came up the MVP, Bryce Harper, and he lined a double down the right-field line to bring in both runners. The lead runner was charged to Alcantara’s stat line. Anthony Bass relieved Okert and got the final out of the inning to preserve Miami’s lead.

Alcantara pitched six and one-third innings, struck out five, walked two, and gave up two earned runs. Not the prettiest start, but just enough to get the win.

Alcantara led the charge for the Miami win, but he was not alone in getting the victory. The fourth inning is when we saw Miami’s offense come to life. Garrett Cooper tied the game with a solo home run.Jesus Sanchez followed that with a triple. Avisail Garcia walked later in the inning and Miami’s super-utility player, Joey Wendle, was up to bat in a crucial moment.

Wendle fouled off tough pitches and was able to work the count. Miami’s third baseman was able to hit a line drive down the left-field line to bring in both runners. Garcia was running on the pitch so he was able to score all the way from first base.

That would be all the scoring Miami needed asCole Sulser shut the door on Philadelphia in the eighth and Anthony Bender earned his second save of the season as Miami’s closer while Dylan Floro is coming back from injury.

BALLGAME! The @Marlins win their home opener and are back in the win column! Great all around game by the pitchers and lineup. Another one run game but this time in Miami's favor. What a great environment tonight a lot of electricity. @LemonCityLive #LetsGoFish #OpeningDay2022

This was a complete team win starting and ending with the pitching staff and being complimented by timely hitting. There’s a new buzz in Miami for their Marlins. If they can continue this type of play and win close ball games, then we can get used to seeing packed houses at LoanDepot Park.