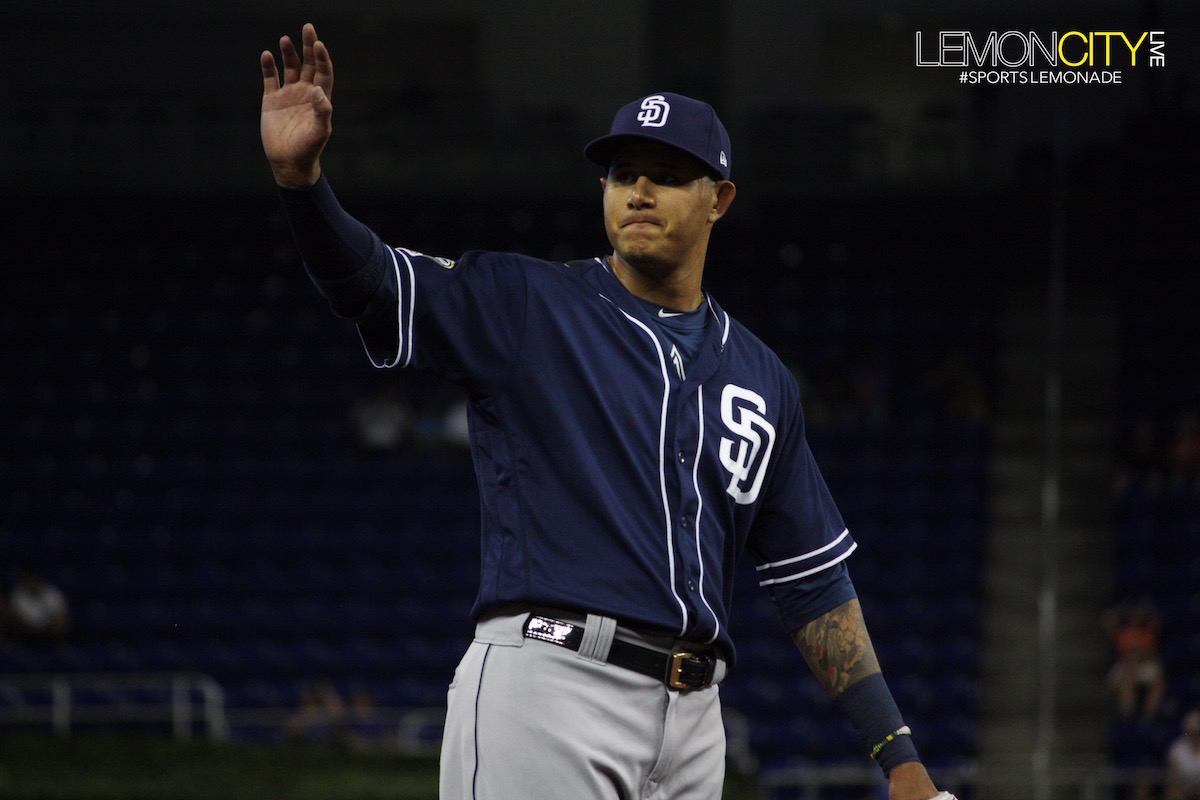 Miami, FL – Fans were treated to a roller coaster of a game, filled with plenty of drama as the Miami Marlins went from the threat of being no-hit to one swing away from a walk-off. Chris Paddack had a padlock on the Fish’s hitting Wednesday night with Manny Machado and the San Diego Padres staving off a last-minute rally, defeating the Marlins 3-2 at Marlins Park. Starlin Castro’s heroics in the eighth and ninth inning capped off a near historic night, preventing the Friars from obtaining their first-ever no-hitter. San Diego remains the only franchise without the achievement.

Paddack was opposed by Miami starter Trevor Richards, churning a relatively decent outing, lasting five frames giving up three earned runs on eight hits and striking out five. His only blemish was the big inning the Padres had in the fourth.

A defensive miscue by Brian Anderson cost Miami. Manuel Margot hit a liner to right and despite a nice sliding effort by Anderson, he was unable to make the play for the final out. San Diego pounced with 3 straight hits including a home run by Austin Hedges to headline the inning.

The bottom of the sixth was highly eventful due to two attempts at breaking Paddack’s no-hitter. Cesar Puello hit a grounder to the shortstop Fernando Tatis, who ended up throwing the ball too high to Eric Hosmer. It was ruled a throwing error. Then With two gone, Miguel Rojas grounded to first, racing over and even sliding in a desperate attempt to beat Hosmer’s tag. He was called out on the field and the Marlins immediately challenged the ruling. After the review, it was upheld.

Then in the home half of the eighth Starlin Castro broke through with a laser to left-center field for the solo blast, dramatically ending the no-hit bid. It was his seventh dinger of the season. Paddack pitched an absolute gem though, containing Miami’s anemic offense all night. He finished the evening tossing 7 and 2/3rds innings, striking out eight.

Nothing but hugs for @PaddackChris in the @Padres dugout after his no-hit bid gets broken up in the bottom of the 8th vs the @Marlins #NearNoNo pic.twitter.com/baF5gs1pjD

In the last inning, both Neil Walker and Rojas reached first base on throwing errors that Hosmer had difficulty picking up. With no outs, Garrett Cooper and Brian Anderson struck out. Down to their last out, Castro donned the cape once more with a bloop single to right, scoring Walker and bringing Miami to within one.

With a full count and the tying run at third, Curtis Granderson didn’t pull the trigger on the payoff pitch, going on a check swing. It didn’t matter, the ball was inside the strike zone.

Time to change it up a bit, you all know who Manny Machado is right? Stand up guy, great ballplayer, four-time All-Star, two-time gold glove winner and former teammate of my younger cousin in Little League. Yeah, that Manny Machado. His sole blemish is when he picked the Dominican Republic over the United States during the World Baseball Classic. How dare he honor his family heritage in one of the most heartwarming ways possible. He attended Brito Miami Private School, which is interesting, that school was practically three blocks from my house. And, my personal favorite, he committed to Florida International University. Watching the guy play is a real treat especially when he returns home.

All the Manny’s are ready for the #305 🔥🔥 Who remembers Miami subs??? #MannyMiami

In fact, despite only three hits this season against Miami, the Hialeah native has hit safely in all five career games here. For all you numbers folks, Machado is 3-for-16 against the Marlins so far this year. He’s also clutch. Heading into tonight’s game, Machado is hitting a hot .388 with RISP, which is seventh-best in the Majors. His 1.188 OPS with RISP ranks eighth. He’s a nightmare against lefties too, leading the league in OBP (.478), OPS (1.345) and slugging (.867). Did I mention he’s clutch?

I guess if there really was one thing to point out it’s his offensive struggles at home. On the road, he’s batting above .305 (Mr. Miami!) but the home cooking just isn’t helping, probably because he isn’t getting enough croquetas and pan con lechon in San Diego. Machado is hitting an icy .236 at Petco Park. Could you imagine if this guy ever played for Miami? An instant major upgrade for the infield, heck for the team in general. I guess we’ll have to wait until 2029 around there to pluck him off free agency. The San Diego Padres signed him on a 10-year, $300 million contract. Speaking of, watching this game reminded me how we traded our eighth-round pick for Fernando Rodney, guess who was that pick? Yep. Just thinking about it, is infuriating.