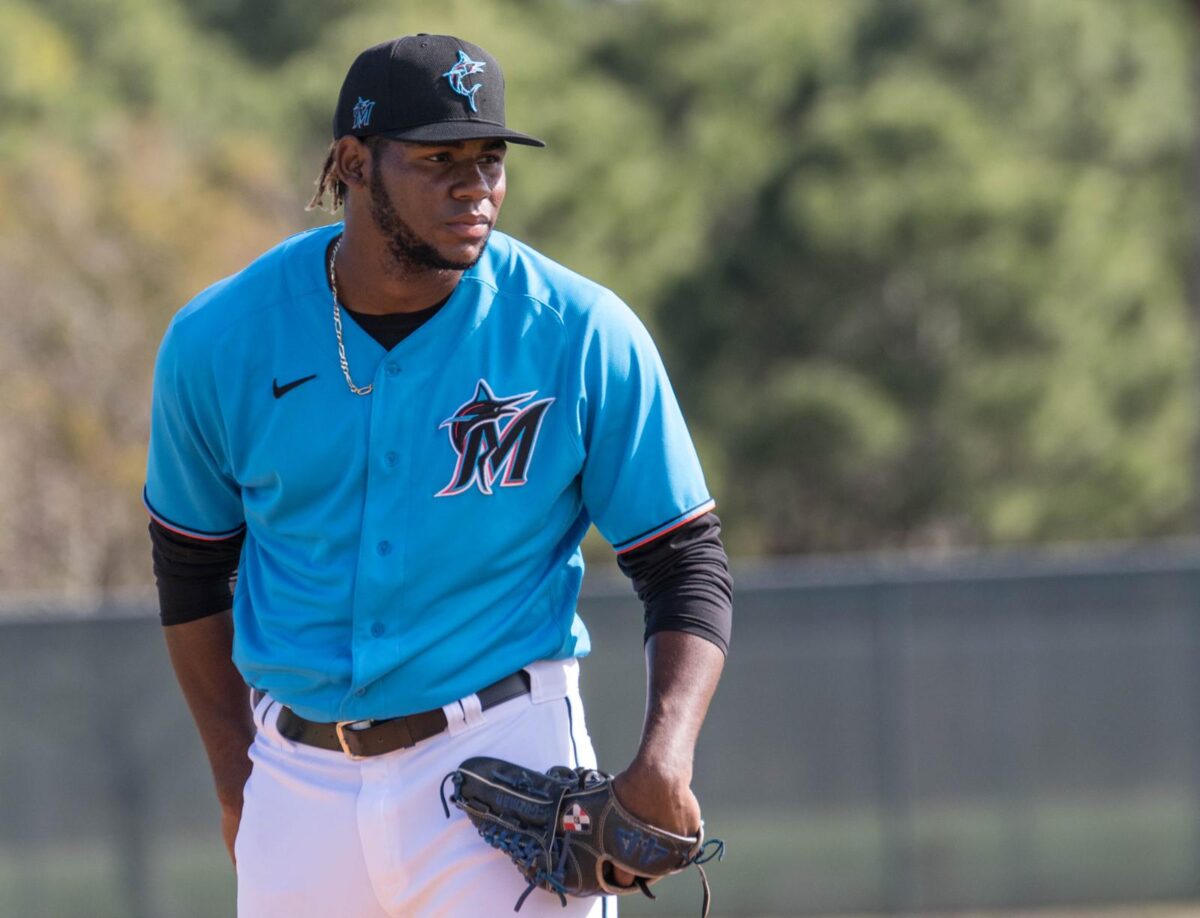 Miami, Florida – It wasn’t easy but the Miami Marlins’ 11 run explosion proved just enough to win, clinching the five-game series versus the Washington Nationals. Pablo López had a very productive evening, lasting five frames giving up three unearned runs on six hits. He found some difficulty in the fifth but the offense kept pouring it on to eventually emerge victorious 11-8. López not only improved to 3-1 but lowered his ERA to 1.98.

Miami’s offense woke up and had a hit parade, scoring six runs in the fourth to take a commanding 7-0 lead. It was their best showing all series. Jonathan Villar got an RBI single to start things off with Matt Joyce driving in two, extending his hitting streak to seven games. Jesús Aguilar and Corey Dickerson kept it going with back to back hits, adding three more runs.

Jesús thought we should have 6 runs,

López was cruising through until he hit a rough patch in the fifth largely because of two defensive miscues. Yan Gomes reached on a throwing error by Brian Anderson, making his way to second on the play. Later in the inning, Jon Berti lost track of Juan Soto’s high fly ball, landing about 15 feet behind him. The mistake allowed Adam Eaton to make it from one corner of the diamond to the other, contributing to López’s shortened outing.

Berti made up for it though, blasting a two-run dinger in the seventh. Miami really made strides tonight offensively with big two-out base hits. They added two more insurance runs and with good reason. The defending champions refused to go quietly, answering with five runs including a three-run blast from Eaton in the eighth. Fortunately, the 11 runs were enough.

The Fish started the series right and split the seven-inning doubleheader. Saturday’s first bout quickly turned into a bullpen game. Daniel Castano had a rough start, pulled after just 23 pitches, 10 of them for strikes. The Nationals scored two in the first for the early lead and never lost it. Josh A. Smith was called in and made the best out of a rough situation, pitching nearly three innings in relief but Washington gradually built a five-run lead. Miami had their first opportunity to score runs in the third only to see Aguilar strikeout with runners at the corners.

Running out of time the ballclub mounted a big inning in the fifth, making it 5-4. The rally came up short as the Nats bullpen kept Miami hitless, bailing out Max Scherzer.

Sixto Sánchez made his MLB debut in game two, tossing five frames giving up three earned runs on six hits. The Nationals took him deep twice but he flashed serious arm strength, keeping it in the high 90s and hitting 100 mph at least five times. Speaking of power, Dickerson smashed one to center to put Miami up 2-1 after three innings.

One look at Sixto Sánchez's stuff in his debut will tell you how he earned @PrizePicks Player of the Week honors. 👀 pic.twitter.com/ZUnWTq3tbd

Miami pounced on Washington’s defensive mistakes to pad the lead. Villar legged one out in the fourth to load the bases and extend the inning. Magneuris Sierra whiffed but made it aboard safely due to the wild pitch by Seth Romero, allowing Alfaro to score. Trea Turner then got hung up on Lewis Brinson’s slow roller netting another run.

Victor Robles kept it close with a homer in the fifth. That same inning Miami responded as Berti came through with a bases-loaded sac fly, they held on for the 5-3 win.

The fourth go of the five-game series started off ok but quickly soured. The Nats busted the game open with five runs in the fifth, making short work of Miami reliever Sterling Sharp. In the latest flurry of roster moves, Sharp found himself DFA’d.  The only bright spots in Sunday’s 9-3 loss were Lewis Brinson robbing Juan Soto of an HR, Corey Dickerson hitting a homer on back to back days, Jesús Sánchez getting his first big league hit, and the MLB debuts of catcher Brian Navarreto and relief pitcher Brandon Leibrandt.

Had a home run joke but Lew Brinson took it away. 😵🤤 pic.twitter.com/3RDtBhjxdo

Navarreto collected two hits, fulfilling a pair of dreams all on the same day. Leibrandt did his job, tossing four scoreless innings allowing a single hit. He was a part of the Phillies organization but was let go when they trimmed their minor league system. Leibrandt went on to play for the Somerset Patriots where he was spotted and then picked up by the Marlins. During his time in the minors, the southpaw went 29-15 with a 2.88 ERA in 86 games and 69 starts.

After years in the minors, he gets his call up and 1st @MLB hit in one day. pic.twitter.com/erBsTZT2Ye

Say hello to the future. This righty is one heck of a flamethrower, showcasing a high 90s fastball that touches 100 mph. Sánchez made a good first impression, generally getting ahead of the hitters with a nice array of pitches. In addition to the four-seamer, he uses the slider, sinker, changeup, and curveball. His sinker can also top out at 100 with the slider and changeup (both high 80s, low 90s) serving as the off-speed options. He rarely used the curveball in his debut.

The Philadelphia Phillies were attending a workout for a Cuban catcher in the Dominican Republic back in February 2015 when they came across Sánchez. They liked what they saw and signed him for $35,000. A year later, he dominated the Rookie-level Gulf Coast League with a 0.50 ERA. By 2017, he became one of the best pitching prospects in all of baseball. Elbow inflammation limited his starts in 2018 and then the Marlins came along.

The right-hander was the centerpiece of the J.T. Realmuto trade for the Fish, traded as the top pitching prospect of the Philly organization along with Jorge Alfaro. He stayed healthy throughout 2019 playing in both Jacksonville and Jupiter, tossing 114 innings going 8-6 with a 2.76 ERA in 20 starts. His 4.90 K/BB ratio is amazing, out of 457 batters faced he fanned 103, walking just 21. Only six managed to take him deep with a WHIP of 1.70. In his five seasons in the minors, he’s 23-18 with a 2.58 ERA and 1.20 WHIP.

The guy’s arsenal is something to behold. I really liked his slider particularly in tandem with the fastball, making it a nasty combination to throw off the hitter. The changeup is arguably his best secondary pitch and Sánchez command in pounding the strike zone is definitely one of his strengths on the mound. Fully capable of overpowering opposing hitters, the 22-year-old can be one of the best hurlers in the Miami Marlins since Jose Fernandez. If he keeps this up the youngster has one heck of a bright future ahead of him. This is going to be a very scary rotation in the near term.