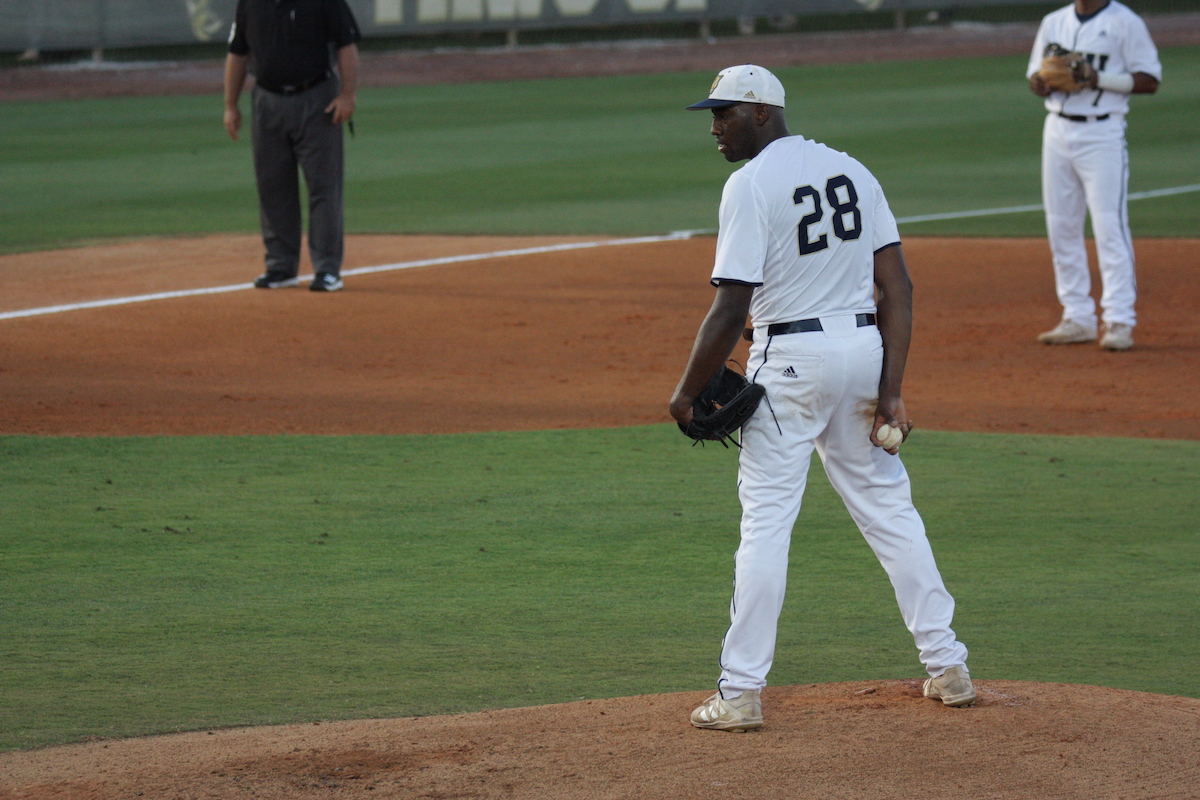 Miami, Florida – FIU made things really interesting late game but their rally came up short, losing the series opener to Charlotte 11-8 Friday night. The 49ers scored in the first five innings leading by as much as 11-3. The Panthers’ pitching struggled mightily in trying to put away their C-USA rivals. Eight of the 11 runs scored were done with 2 outs. By the time Florida International’s pitching and defense finally got it together, the visitors never scored again. However, the mountain of runs proved too high to surmount.

Both the starter Jan Figueroa and the first reliever out of the bullpen Matt Fernandez had poor performances. Together they surrendered the 11 runs and all but one of the hits. Adding to their woes on the mound were the questionable calls from home plate umpire Rusty Griffin when it came to the strike zone. The frustration was not only coming from coach Mervyl Melendez who was seen having an intense exchange with the ump but also from the Niners later in the game. Amazingly, no one was tossed despite the tension. Friday night’s contest saw some sloppy pitching from both sides: combined there were seven wild pitches, 13 walks, and a balk.

Off to the races

Charlotte jumped ahead in the first with a pair of two-out singles. Figueroa beaned Carson Johnson to start the inning before fanning Austin Knight then giving up a single to David McCabe. Gino Groover smacked a base hit through shortstop Steven Ondina who was unable to glove the high hop, allowing Johnson to score despite tripping and falling on his way home. Will Butcher laced an RBI single of his own, plating McCabe as the incoming throw was offline.

The 49ers extended their lead in the second frame. Dominic Pilolli hammered one past Adrian Figueroa down the first baseline for the two-out, two-RBI double to make it 5-0 Charlotte. FIU got one back on their next trip to the plate. Luis Chavez hit a solo shot to left to put his team on the board.

This was voided by more offense from the Niners.

Todd Elwood singled to right in the third, scoring Aaron McKeithan to keep the visitors firmly in the driver’s seat. They were so successful in hitting nearly everybody in the starting lineup except Knight had recorded a hit after three frames. The third baseman would go 0-for-6.

Fernandez was a strike away from escaping a bases-loaded jam in the fourth but when Ondina gloved Jack Dragum’s hard grounder, he made a terrible throw to Figueroa resulting in a very costly error. The mistake emptied the bases making it 9-1 Charlotte.

FIU’s bats showed some life that same inning, however, as Francis Villaman hit the two-run double down the third baseline to make it 9-3.

⬆️4⃣ | Niners take advantage of a big FIU error to score three more! McGowan gets back to work with an eight-run advantage!

The second half of the game saw the momentum shift over to the home team. Florida International got something cooking in the sixth after Justin Farmer drew a walk and Christian Eiroa doubled to right, putting two runners in scoring position with nobody out. Charlotte turned to its bullpen sending out Spencer Giesting to replace Bryce McGowan who pitched a beauty, fanning 9. Villaman hit a 2-run single bringing home Farmer and Eiroa to make it 11-5.

FIU had a bit of an injury scare after the seventh-inning stretch. Adrian Figueroa collided with Charlotte second baseman Carson Johnson on the final play of the inning. Chavez hit one over to the area which resulted in the collision. Fig was called out for interference on the play but was able to walk away from it. His 13-game hitting streak came to an end going 0-for-4 in the opener.

It was a rough eighth inning for the Niners on the mound. They had to make two pitching changes in a chaotic frame that saw three wild pitches, two walks, and a hit-by-pitch. The Panthers ended up scoring three runs on one hit. Farmer made it home on the second consecutive wild pitch while Rey Hernandez hit an RBI single driving in Dante Girardi. Villaman sneaked in on an erroneous play by the infield. Florida International got two runners on in the ninth but was turned away to end it.

An exciting way to end 4/9 day with our fifth-in-a-row and an 8-1 start to C-USA play! Johnson and Elwood pick up three hits in a 15-hit attack! We're back with the Saturday double dip starting at 2:30pm tomorrow afternoon!#GoldStandard | #9ATC pic.twitter.com/rCKhyc7xlZ

Two players will be awarded this accolade. Shawn Perez was the first FIU pitcher to stop the 49ers scoring streak, lasting over three innings giving one hit. Francis Villaman drove in half the runs which is one heck of a productive night in my book.

Jan Figueroa’s performance put his team behind the eight ball. It isn’t entirely his fault, six of those runs are his responsibility.
(Visited 17 times, 1 visits today)