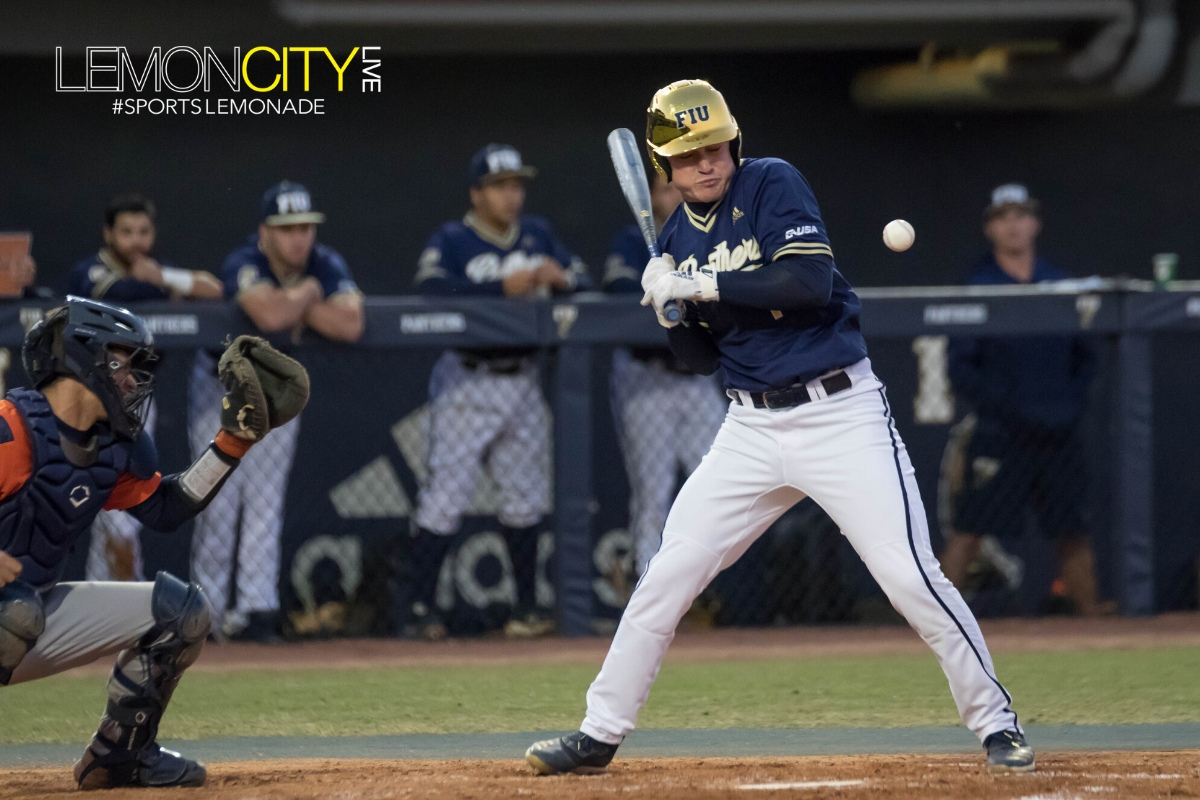 Miami, FL – The Pepperdine Waves washed away the FIU Panthers, winning 9-2 on a combination of two longballs and plenty of timely hitting. FIU was unable to convert on several scoring chances, sinking their chances of tying the weekend series in a once every four years opportunity.

Tyler Myrick squared off against Cooper Chandler in a battle of the righties going six deep, giving up three earned runs and scattering four hits. His efforts would not be enough. The blue and gold threatened twice early in the game but Chandler escaped unscathed. The sophomore entered the game brandishing a 2-0 record with a cool 0.69 ERA.

In the opening frame, Justin Farmer stranded both Alec Sanchez and Jose Garcia, grounding out on the payoff pitch.

FIU found itself in a similar situation the next inning. Juan Teixeira ripped a single into center, moving up Ben Rozenblum after getting beaned by the pitcher. Robert Sotolongo was retired but not before moving up the runners for leadoff man Jarrett Ford who hit out to end the effort.

Rozenblum flashed some leather in the third, locking onto Ryan Johnson’s hard-hit, throwing across the diamond for the out. Billy Cook took Myrick deep getting a hold of the 1-2 pitch, launching it to right for the solo shot to put the visitors on the scoreboard.

The Waves shored up two more runs their next trip to the plate. Justin Lutes walked to start things off and Reese Alexiades laced an RBI double. With one gone Mike Malinchak singled up the middle, scoring Alexiades from third.

Pepperdine committed two errors in the fourth allowing FIU to pounce, briefly making it a one-run game. Farmer singled through the right side, advancing to second on an error by the pitcher. The hot-hitting Teixeira brought Farmer home with a single through second base, turning it into a two-bagger after the shortstop Wyatt Young botched the throw. Luis Chavez kept up the scoring with an RBI double into the gap at right-center.

The Wave answered in the fifth, capitalizing on the Panthers’ own defensive miscues. Aharon Modlin reached first on an error by Sotolongo, stealing second. It was all Lutes needed as he hit up the middle to score his teammate.

FIU loaded the bases in their half of the inning but Teixeira crushed it straight into the glove of Ryan Johnson at second. The missed opportunity would haunt the Panthers.

The seventh and eighth proved to be high tide as Pepperdine produced five more runs to wash away the hopes of FIU.

Angel Tiburcio came in for Myrick in the seventh and Johnson welcomed him with a moonshot to left, sparking a three-run inning. Alexiades and Joe Caparis frustrated Tiburcio further, hitting back to back run-scoring singles.

Tiburcio was subbed out for Mario Fernandez but the right-hander didn’t do any better, walking two batters and giving up a pair of RBI hits. The loss drops FIU to 7-2 while the Pepperdine Wave rises at 9-1.

FIU baseball is facing its toughest opponent so far this season and winning has become elusive for them. Normally able to put up runs on the board, their clutch hitting dried up Saturday. Despite racking up 11 hits, they only scored twice and stranded 12 runners on the base pads. Guys like Farmer and Derek Cartaya were swinging it but going 2-for-11 with runners in scoring position won’t work against guys like Pepperdine.

The bullpen meanwhile is struggling mightily this series, surrendering 11 runs (Seven of them earned) in their first true test. Steven Casey had great outings against Fordham and George Mason but was batted around Friday night. He faced five hitters and gave up four runs (two of them earned) on just as many hits, failing to record an out. Prior to Saturday’s game, Tiburcio’s last appearance was against Bethune-Cookman nearly two weeks ago so you could call it shaking off rust or just plain cold. Either way, not a good night for the sophomore.

One person I am very impressed with is Juan Teixeira. Mentioned in the 2020 preview as one of the players who needed to step up, the senior has been on a tear this season hitting .543. He leads the team in hits (19), RBIs (13) and Slugging percentage (.714). So far, it’s been a complete turn around from 2019 when he finished the year with a disappointing .253 batting average, collecting just 14 RBIs. He’s one away from matching the stat, imagine that. His rise makes this squad a lot more dangerous at the plate, they have outscored opponents 90-39.

Juan Teixeira nabs this one, going 2-for-4 and helping to bring the first run back in the fourth.

Angel Tiburcio let the game get away from FIU when he came out in relief in the seventh, coughing up three runs.