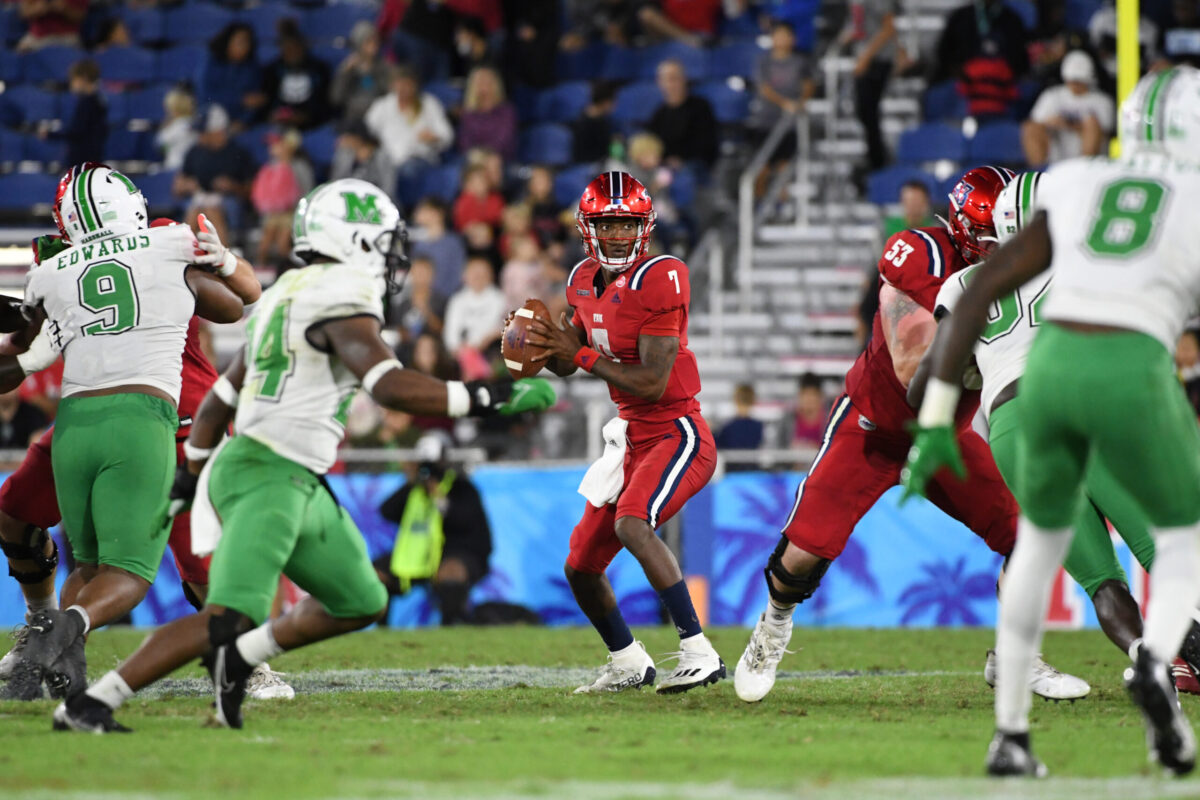 Last week’s loss to the Marshall Thundering Herd was disadvantageous for the Owls for many reasons. Not only was it a disappointing loss to a conference rival, but now the Owls don’t control their own destiny in the East division in Conference USA. Now FAU looks to bounce back against the Old Dominion Monarchs en route to one goal that is easier said than done.

It starts tomorrow as the Owls travel to Norfolk, Virginia to face the Old Dominion Monarchs. They look to improve in every aspect of the game that failed to lead them to victory last Saturday at home.

“You want every game to be a learning experience. Especially when you lose. You have to learn from it. If you don’t, you’re going to fall behind. When you’re doing the game like that with a young team, they have to understand what it’s going to take to win against opponents like that. With that kind of game, it’s a different mentality in how you go about doing things. As the year is going, our guys are learning what it’s going to take to be a championship football team and unfortunately, we had some setbacks in games. As long as we learn from them, I think we’ll continue to get better as a young team that can make sure those things don’t happen as we move forward.”

Taggart also touched on Old Dominion and what he’s seen from them this season after a 3-6 start.

“I think Old Dominion is a much-improved football team. You watch as the year went on, they got better each and every game. It’s one of those games where you can’t look at the record. It’s a good team that’s getting better. They didn’t play last year and had to get used to each other this year. Now toward the latter part of the season, you’re starting to see them take off.”

We’ll take a look at the offense and defense of the Owls heading into Saturday and give final score predictions.

For the offensive side of the ball, FAU only scored 13 points against Marshall while their season average going in was 30 per game.

As most people will point to the crucial drops that could’ve resulted in a much different result, FAU will have to revisit the fundamentals and move on from the mistakes.

Offensive coordinator Michael Johnson talked more about the drops in the passing game:

“You have to loosen the defense up a little bit in order to run the ball, otherwise they’ll outnumber you. We had some opportunities for some big plays in the passing game down the field. We just didn’t make the plays. It goes together. If you’re going to run the ball, then you have to get [the defense] out of the box. Once you get them out of the box and you back them up, now you should be able to manage the guys upfront.”

Taggart talks about the offense recollecting themselves after a frustrating game against the Herd.

“I loved our players’ mentality after the game in the locker room and what a few of them had to say to each other and what we needed to do moving forward. I think it’s always good when guys go out and don’t play the way they know they should and then the next morning you see them working on their craft trying to get better. I believe in all of those guys that dropped the ball and I believe they’ll make a catch that will make up for it and help us.”

The run game against Marshall was successful, but maybe to a fault. FAU leaned heavily on the run in the first half with quarterback N’Kosi Perry only throwing nine passes through the first 30 minutes of the game. Again, the Owls did rush for close to 250 yards led by a 138-yard performance from Johnny Ford, but Perry didn’t seem to be in rhythm.

While the drops can be equated to the pedestrian performance, they could’ve also been in part due to the offensive line and the coverage of Perry. Marshall recorded six sacks on Perry last Saturday and disrupted him all game. Taggart gives his assessment on the offensive line:

Offensive lineman Desmond Noel, who plays left guard, talks about what the line and the offense need to do in order to succeed.

Looking at Old Dominion’s defense, they’ve given up 243.9 passing yards per game, 119.6 rushing yards per game and have allowed 29.3 points per game. While the Monarchs’ defense has been successful in their past two games against FIU and Louisiana Tech, those offenses are nowhere near as explosive as what the Owls are.

FAU’s next opponent after ODU is Western Kentucky who the Monarchs met before the aforementioned two games and allowed 43 points. WKU quarterback Bailey Zappe went off in that game as he threw for 397 yards and five touchdowns. This can be a bounce-back game for N’Kosi Perry.

Even though the focus has been on the receivers, it would be great to see the tight ends get back in the fold. John Mitchell and Zaire Mitchell-Paden haven’t been in the fold, but Taggart says that it has been a matter of circumstance.

“It’s more a matter of circumstance and more of us finding ways to target them again like we did earlier in the year,” Taggart said. “The majority has been 11 personnel and not 12, earlier in the year we played a little more 12 and targeted those guys more.”

Despite what the record says for Old Dominion, their offense has found success, especially in the past few weeks led by quarterback Hayden Wolff.

Wolff hasn’t been the starting quarterback all season as he’s been splitting time with D.J. Mack Jr., but he has gotten the nod the past couple of games. So far, he’s thrown for 899 yards, four touchdowns, and four interceptions. Taggart talks about what Wolff does well:

“Him getting the ball out of his hand quick and distributing it to his playmakers. He’s doing a good job of getting it to them while they’re open and where they can run with the ball after the catch. Now you see with Hayden [Wolff] in there they’re more consistent. They’re more efficient with what they’re doing.”

To help Wolff, he has some offensive playmakers that have helped his success. Tight end Zack Kuntz has been their leading receiver as he’s caught 53 balls for 550 yards and four touchdowns.

Defensive coordinator Mike Stoops talks about Kuntz and what makes him effective in that offense.

“They have a couple of them that they want to emphasize. They make a conscious effort to get the ball to the tight end. There’s certain ways they try to get him the football. He’s a very effective player. He’s a big target. He runs well. You don’t see a tight end usually stretch the field like he can. They use him as a wide receiver and they do a good job with that and try to put him in positive positions, matchup issues. You definitely have to be conscious of him.”

Kuntz will be a test for this defense, especially on the defensive backs. FAU cornerback, Romain Mungin, who’s been productive the past couple of weeks, also speaks on Kuntz and how the defense views him:

“He’s one of the key players, so if we shut him down, we’ll be good, but they try to get him open as much as possible,” Mungin said. “They’ll put him out wide. They’ll try to get him the ball the most.”

While stopping the run is key for any game, it’s even more important against ODU as their lead backs Blake Watson and Elijah Davis. Watson has seen more work, but both combine for 1,203 yards and eight touchdowns. Stoops talks about stopping the run this week.

“I think for most teams, the run sets up the pass. Teams that run the ball effectively keep you off balance and [Old Dominion] did a good job of that a week ago and took advantage of some situations against FIU. They’ll run the ball in passing situations, probably more than any team we’ve seen thus far. We’ve got to make sure our defense can react and put ourselves in positive situations, show them something, and do something different. We just have to be smart and understand the situation, where you’re at, in the game. For us, we can’t just keep overreacting to the run and letting them throw the ball. We were hurt last week against a very good running back. He had three runs in the fourth quarter for about 50 yards, but other than that, we stopped the run, but then your pass coverage becomes a bit of a liability too. We have to do a better job putting pressure, rushing the quarterback, and covering as well.”

In stopping these playmakers from running wild, Taggart talks about the plan to prepare for these offensive weapons.

“Well, I think whenever you start picking out guys who’re having success, I think defensively first and foremost, you better know where they are at all times. You look at the tight end, he’s one of those guys you know they’re going to target him and get him the ball. So we’re gonna have to do a good job and know where he’s at all times. Have to do a great job of tackling him and a general great job of covering. The one thing they’ve done a good job of is getting the ball out of their hands quick so our D-line has to do a good job getting their hands up and bringing as much pressure as we can, but we still have to stop the run. I think in any game you have to stop the run and try to make a team play left-handed. But defensively, we just can’t give up explosive plays for touchdowns. We got to make them earn everything they get.”

It’ll be much more positive in my predictions than it was last week. I predicted FAU to lose last week to Marshall, but against Old Dominion, we’ll see the Owls get back in the win column.

I see the offense having a rebound performance from last week, redeeming the missed opportunities and self-inflicting wounds.

As said earlier, I fully expect N’Kosi Perry to come back from last week and have one of his better performances of the season. While I think there’s a chance we see this offense start slow as it’ll be on the road, they’ll get into a rhythm like in their last away game against Charlotte.

With that, Stoops and the defense will be bringing a game plan that will disrupt the confidence of Wolff and the Monarchs offense. As the Miami Dolphins did to the Baltimore Ravens on Thursday night, blitzes and immense pressure to the offense will make them play “left-handed” as coach Taggart said.

This will be a close one in the first half, but the Owls will trail away in the second having an offensive explosion.

If somehow the Owls lose against Old Dominion, it’ll be another disappointing loss. FAU has had too many of those this year.